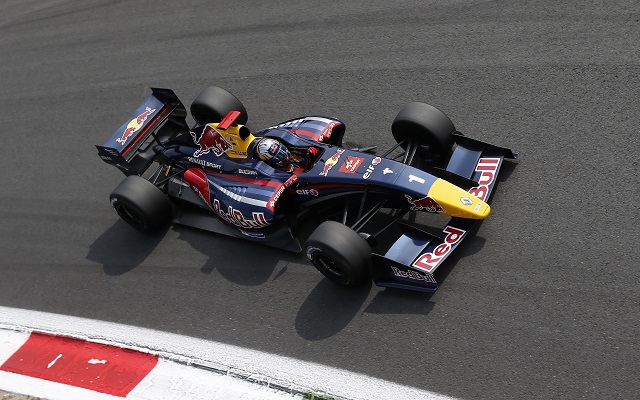 The young Red Bull junior proved much quicker than his rivals, consistently setting unmatched pace and crossing the line more that ten seconds clear of the opposition.

The Spaniard was under brief pressure at the start as he got a lot of wheelspin off the line and was side by side with Comtec’s Nikolay Martsenko into turn one.

However, Sainz held on to the lead and proceeded to pull away from the Russian, establishing a two-second gap over the opening laps and then setting the pace for the remainder of the race’s running time.

Fellow front row starter Oliver Rowland also had some issues off the line, letting both Martsenko and AVF’s Zoel Amberg through.

The Brit soon recovered and went on to reel in third-placed Amberg over the subsequent laps. When he finally managed to pull off the pass on the Swiss driver, Lotus junior Marlon Stockinger took advantage of the situation to slot into fourth behind Rowland.

The Filipino racer then kept up with Rowland, but never quite got close enough to attempt a proper overtaking move.

At the front, Sainz cruised to victory, while Martsenko led a calm race in second, picking up his first podium in the category.

Rowland held Stockinger at bay to take third, while Amberg settled for fifth place. Zeta Corse’s Roberto Merhi held on to sixth ahead of a charging Matthieu Vaxiviere, while Sergey Sirotkin had to do with eighth, keeping Red Bull junior Pierre Gasly at bay.

43 seconds after the leader crossed the line, the final points-scorer Pietro Fantin took the checkered flag.