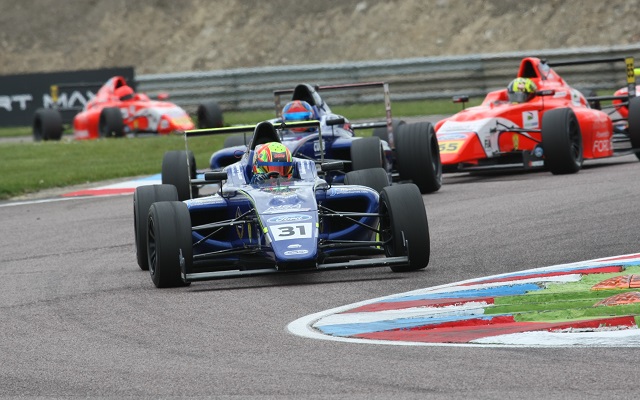 Carlin’s Lando Norris claimed his third victory of the 2015 MSA Formula season in an action-packed race two at Thruxton, having started just tenth.

An against-odds win for the Briton was ensured with a last-lap overtake on SWB’s Rafa Martins.

Fortec prodigy Dan Ticktum was the reverse-grid poleman for the race, but was passed by Martins after the start, only to retake the spot on lap two.

But his entire race was then cruelly undone by an engine failure, forcing him to hit the pitlane.

So it was Martins into the lead, with a large number of drivers scrapping for second behind him.

Baybutt then demoted him to third, but Leist got to retake the spot when the JTR driver tagged Martins and spun out onto the grass.

Martins remained unscathed but remained under huge pressure from Leist, the two of them being reeled in by Norris.

The Carlin driver made quick work of Leist upon catching up and then took first place with three minutes to go.

But just as the race seemed over and done with, Martins passed Norris back, their fighting also allowing race one winner Sandy Mitchell to join the battle for victory.

The three were separated by just three tenths coming into the final lap, where Norris and Mitchell both passed Martins to finish first and second respectively.

Martins then narrowly held off Collard and Leist for third, while Herta picked up sixth place.

Seventh went to Enaam Ahmed ahead of Tarun Reddy and Darius Karbaley.

Sennan Fielding, having been taken out in race one, was originally up to seventh from 16th on the grid in just three laps, but dropped off to finish tenth.