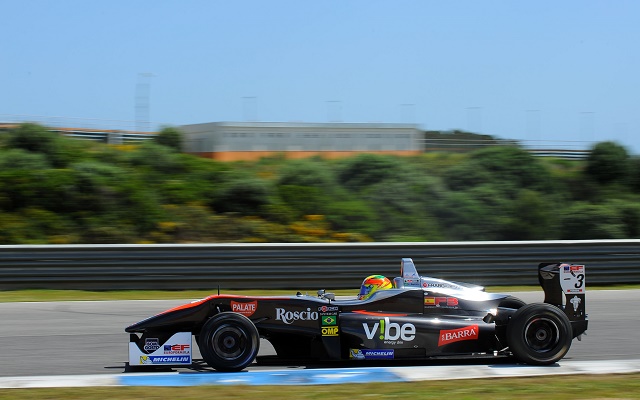 RP’s Vitor Baptista was untouchable in the second race of the Euroformula Open round three at Estoril, winning by a margin of almost ten seconds.

Having lost a podium finish to a penalty on Saturday, Baptista beat champonship leader Konstantin Tereshchenko to claim his second win in the category.

Tereshchenko started the race from his third consecutive pole, having converted the previous two into wins.

And he kept the lead off the line, albeit just barely entering turn one ahead of both Baptista and a quick-starting West-Tec driver Tanart Sathienthirakul.

The Thai racer, however, was left on the outside line and had to yield to teammate Yarin Stern into the next corner.

Having been stuck behind Tereshchenko for most of race one, Baptista was desperate to get past the Russian. He first tried a move into turn one, taking the inside line but running wide under brakes and letting Tereschenko cross over and back into first.

Baptista then looked to find a way past the Campos driver into turn nine, but was not successful and allowed Stern to close in on the duo.

Finally, however, the RP driver had the lead with another attempt into turn one. Right after that, Stern was caught out running over the kerbs and lost control into the gravel.

Tereshchenko briefly kept with Baptista after losing the lead, but the Brazilian was in a league of his own, soon beginning to gain a second per lap on the rest of the field.

He ended up cruising to the finish, with Tereshchenko settling for a fifth consecutive podium in second and Sathienthirakul holding off Yu Kanamaru for third.

DAV’s Leo Pulcini kept Damiano Fioravanti behind to record his personal best finish of fifth, while Diego Menchaca denied Andres Saravia in the fight for seventh.