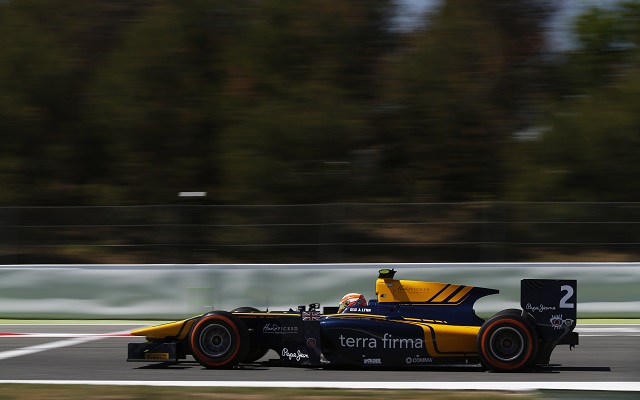 Alex Lynn saw off the challenge of Stoffel Vandoorne to score his first GP2 victory on his fourth start in the category in the Barcelona sprint race.

Reverse grid pole-sitter Norman Nato kept the lead off the start, while GP3 champion Lynn made a fast start from fourth to move up to second.

The virtual safety car was used for the first time on lap one when Rene Binder was fired off into the Turn 4 barriers by contact with Andre Negrao.

When the VSC ended, third-placed Raffaele Marciello was caught out and spun off track, handing feature race winner and championship leader Vandoorne a free place.

Nato struggled for speed after the restart and fell down the order, with Lynn taking the lead ahead of Vandoorne.

Vandoorne quickly closed onto Lynn?s tail but then dropped off again. He attempted to attack again late on, but lost the life in his tyres

Lynn?s was joined on the podium by his DAMS team-mate Pierre Gasly. The Frenchman started from the front row of the grid but got a poor getaway, but was able to recover to third. Behind him, Alexander Rossi kept up his 100 per cent record of top-four finishes so far this season.

After his Russian Time team-mate Mitch Evans was unable to start the race when his car stopped on the way to the grid, Artem Markelov enjoyed a strong showing from 12th on the grid to take fifth – his best result yet in GP2 and just his second points finish.

Rio Haryanto was sixth – the Bahrain sprint race winner’s worst result of the campaign to-date. His Campos team-mate Arthur Pic was able to pass Nato on-track, but a five-second penalty for being out of place on the grid relegated him to eighth behind his fellow Frenchman.

Pic had accidentally tried to take Evans’ grid slot at the end of the formation lap, which caused Nobuharu Matsushita behind him to stall his engine and trigger an aborted start.

The top 10 was completed by Daniel De Jong and Sergey Sirotkin, the latter holding off Jordan King by the narrowest of margins at the line after getting all out of shape at the chicane.