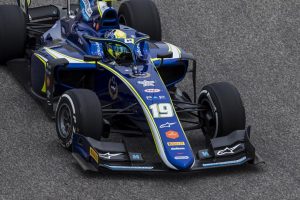 Carlin’s Lando Norris took pole for the opening race of the 2018 Formula 2 season at Bahrain, marking the British team’s return to the championship.

Norris ran very deep into the first turn on his pole lap, but was still quickest in the first sector and bettered Russell’s time by 0.062 seconds.

The pole was the first for Carlin since Felipe Nasr went fastest at the Hungaroring back in 2014, back when the series was known as GP2, and marked a successful return for the team after taking a one year hiatus in 2017.

GP3 champion Russell was on top for most of the session, and had a half second gap to second place with just under 10 minutes to go.

That gap was reduced first by DAMS driver Alexander Albon, who is not confirmed to drive beyond this weekend, and who will line up in third for the feature race.

A difficult qualifying session for Prema was saved by a last second lap by Nyck de Vries, who slotted in fourth, just over a tenth off Norris’s benchmark.

A super late lap by Roberto Merhi took him from the back of the grid to 13th, just ahead of Trident’s free practice pace-setter Arjun Maini, and DAMS regular Nicholas Latifi.

Artem Markelov, the 2017 runner-up and Bahrain feature race winner, could only manage 17th, while technical issues restricted Sean Gelael’s running at Prema, although he still managed to beat Campos Racing’s Roy Nissany on the back row of the grid.