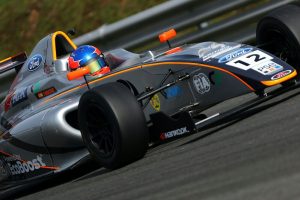 Ginetta Junior graduate Jewiss set the pace for much of the session, before a flurry of late laps reshuffled the order and left JHR Developments man Simmons on pole, by 0.031 seconds.

Johnathan Hoggard sank down the order to a dissapointing fifth at the end, with the Fortec Motorsports man having been in the top two for most of qualifying.