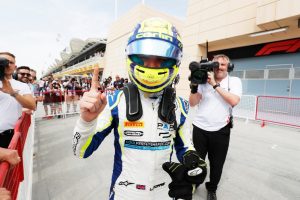 Lando Norris took a dominant first victory in the 2018 Formula 2 season opener, in which Artem Markelov charged through to the podium from a pitlane start.

A stall on the warm-up lap for Markelov meant the Russian Time driver started from the pits, while Carlin man Norris led away the field up front.

The Briton was untouchable in the first stint, pulling out a lead of nine seconds within the first nine laps.

A troublesome pitstop cut that lead down, but we went on to win the first race for the new Dallara F2 2018 car by 8.321 seconds.

Carlin team-mate Sergio Sette Camara made a one-two for the team on its return to F2 after a year away.

He benefitted from a slow start for front row man George Russell and slow pitstop for Nyck de Vries to take his third career podium in a spectacular late battle with Markelov.

Having gone for a long first stint, Markelov came out inside the top 10 after eventually pitting.

He then picked off driver after driver, and was into third when Russell and Alexander Albon encountered straightline speed problems.

Going into Turn 1 on the final lap, Markelov went for a late braking move on Sette Camara and seemed to have made it stick, only for the Brazilian to dive back inside Markelov to retain second place.

They fought for the duration of the final lap, with Sette Camara finishing the race 0.212 seconds ahead.

Albon and Russell finished fourth and fifth for DAMS and ART Grand Prix respectively, with Prema’s de Vries on their tail at the end.

De Vries’s team-mate Sean Gelael finished an impressive seventh from the back of the grid, with the pair coming very close as they battled for position.