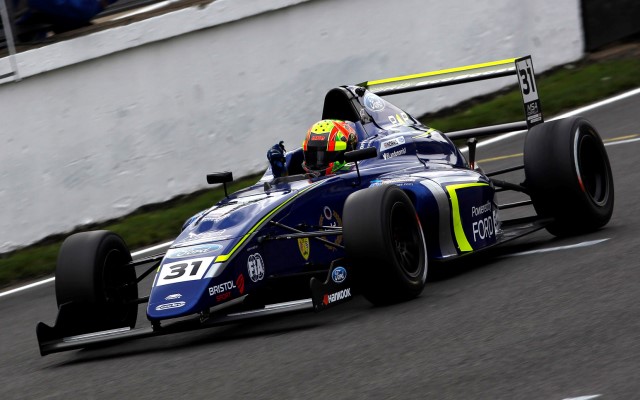 Lando Norris has secured the inaugural MSA Formula title after following his rival Ricky Collard across the line in the penultimate race of the season at Brands Hatch, won by Enaam Ahmed on the last lap.

With Collard and Norris both down the order on the reverse grid, finishing one place behind his rival was likely to be enough for Norris to guarantee himself the crown.

The pair both lost out on the opening lap, pushed down to seventh and eighth respectively.

Collard managed to pass floundering polesitter Dan Baybutt on lap four to crucially put a car between himself and Norris, but the Carlin driver was able to get by himself a lap later.

Norris then set a pair of fastest laps in pursuit of Collard, and although the Arden driver defended strongly to keep him behind, he couldn?t stop Norris finishing just behind him to wrap up the crown, 28 points clear with 26 available in the final race.

Up front, Sandy Mitchell took the lead away from Baybutt off the line and spent most of the rest of the race leading Arden team-mate Ahmed, who climbed to second past Rafa Martins on lap two.

Ahmed – a fellow 2014 world karting champion to Norris – remained close enough to Mitchell to launch a bid for the lead on the final lap, going around the outside out on the grand prix loop on the final lap.

The result was Ahmed?s first win in MSA Formula, hot on the heels of a hat-trick in SMP F4 in Estonia last week, and denied Mitchell a first victory since his Thruxton double in May.

Martins held onto his first podium finish since that same weekend, just 0.037s ahead of Toby Sowery, who had worked his way past Colton Herta earlier on to get fourth.

Behind Collard and Norris was Sennan Fielding in eighth from 17th on the grid with James Pull and Baybutt rounding out the top 10.