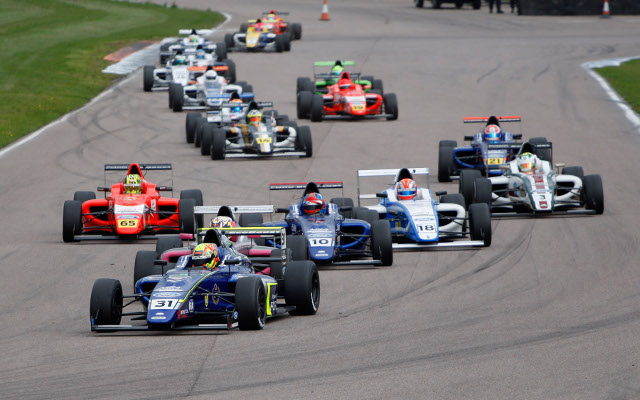 Lando Norris has moved into the MSA Formula championship lead again with victory in the opening race of the Rockingham weekend.

Norris kept the lead from pole position, despite a good start from Carlin team-mate Colton Herta alongside him.

As Norris claimed the lead for good at the Deene hairpin, Dan Ticktum got past Herta for second place.

The safety car was then required after Toby Sowery ended his first race with the MBM team in the gravel trap after opening-lap contact.

After the restart, Norris built a 1.8-second gap over Ticktum to repeat his win from the opening race a fortnight ago at Knockhill, and move into the standings lead just as he had done then.

Ticktum successfully defended second place from Herta, who in turn held onto a podium spot while under attack from Enaam Ahmed.

Matheus Leist was fifth ahead of Sennan Fielding and Petru Florescu.

Dan Baybutt crossed the line eighth but had 10 seconds added to his race time for being out of position at the start, relegating him to 17th.

Inheriting the place was Ricky Collard, who had to come from the back of the grid after crashing in qualifying.

He will start second on the reverse grid for race two behind Arden team-mate Sandy Mitchell, who finished up ninth ahead of Tarun Reddy.