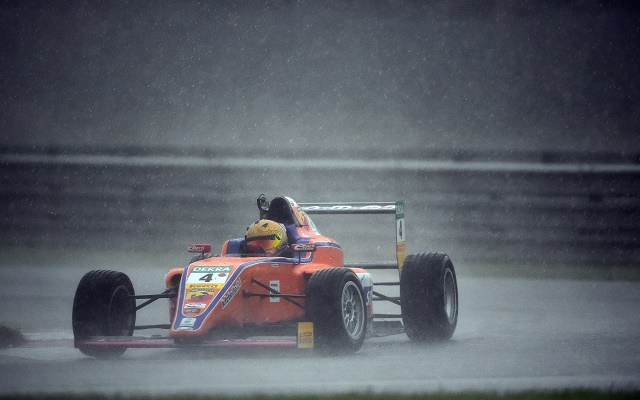 Mucke Motorsport drivers David Beckmann and Robert Shwartzman topped the two respective qualifying sessions ahead of the Italian F4 round at Adria.

Beckmann confidently took pole in a dry first qualifying, while Shwartzman led the way in a second session that was affected by rain.

Prema Powerteam finished the first run in second, third and fourth, missing out on pole for the first time since May. Championship leader Ralf Aron headed the Italian team, with Guan Yu Zhou and Giuliano Raucci behind.

Raul Guzman took fifth for Malta, ahead of Shwartzman and Joao Vieira, while Nico Rindlisbacher, Marino Sato and Guzman’s teammate Kevin Kanayet made up the top ten.

Shwartzman took the lead early in session two and would get to keep it until the end – as an incident between Rindlisbacher and Diego Bertonelli brought out the red flag, which stayed out for just enough to see the track covered in rain.

Rindlisbacher’s first lap put him in a career-best second place, ahead of Aron, Vieira and Marcos Siebert.