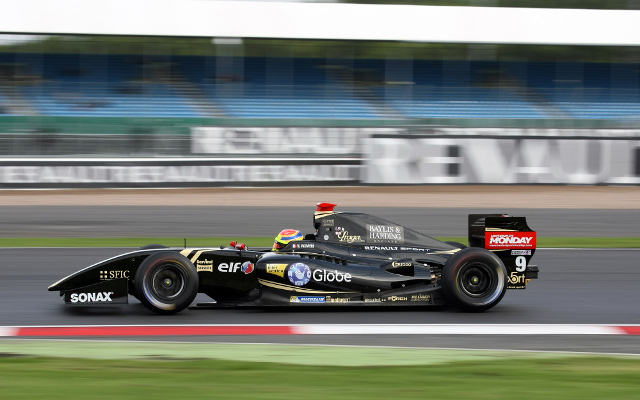 Matthieu Vaxiviere claimed a crushing pole position for the second Formula Renault 3.5 race at Silverstone, beating championship rival Oliver Rowland by more than half a second.

Vaxiviere led the way after the first runs, with he and new Lotus team-mate Nick Yelloly in a league of their own at the head of the times.

After the usual mid-session lull, did not take long to reclaim the lead after Tom Dillmann and then Tio Ellinas had briefly moved ahead with around five minutes to go.

Vaxiviere then set three session-best sectors on his next lap to move seven tenths clear of the field and secure pole.

The closest anybody could get to that at the chequered flag was points leader Rowland, who had been down in 15th in the middle of the session after a massive lock-up at Village on just his second lap of the session.

He ended up 0.58 seconds behind Vaxiviere and ahead of Yelloly, though the series returnee will take a four-place grid drop for not respecting blue flags during race one.

Nicholas Latifi will therefore start third, his second best grid position of the season. Gustav Malja would have been promoted to fourth, but had his best time deleted over track limits, dropping him to 11th.

Pietro Fantin will therefore be fourth, with race one winner Tio Ellinas set to share row three ahead of?Dean Stoneman.

The demoted Yelloly will be alongside?Nyck de Vries on row four, with Egor Orudzhev ninth and Jazeman Jaafar 10th.