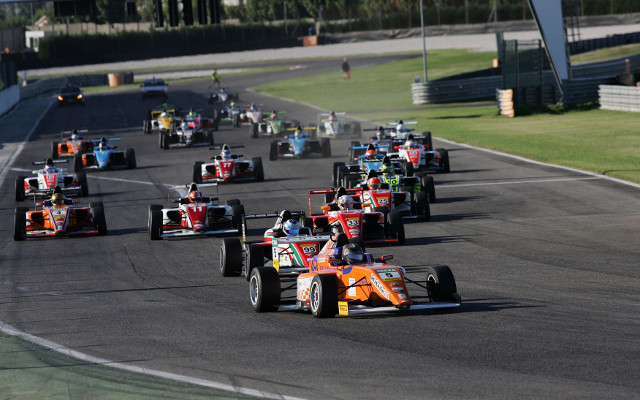 Mucke Motorsport’s David Beckmann was unchallenged en route to his third win of the 2015 Italian F4 season in race one at Adria.

The German started strongly from pole and barring the first few laps, his win was never under threat as he came across the line with a 5.6-second lead over Ferrari junior Guan Yu Zhou.

The start saw Prema driver Giuliano Raucci and Antonelli’s Joao Vieira come together at turn three, with both drivers being forced to retire on the spot. The incident brought out the Safety Car.

Zhou ran third for much of the race, but capitalised on teammate Ralf Aron’s mid-race lack of pace and passed him in the closing stages. The Estonian came under pressure from Robert Shwartzman as well, but managed to hold on for third.

ADAC F4 regular Moritz Muller-Crepon took his first points’ finish in ninth, while Colombian racer Kevin Kanayet rounded off the points in tenth, having run as high as sixth before losing pace.