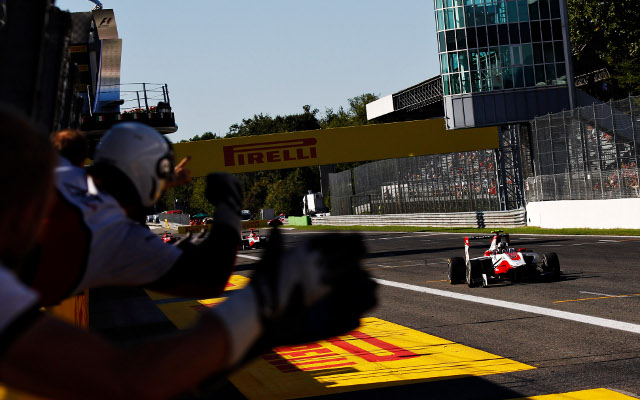 Marvin Kirchhofer claimed victory in the reverse-grid GP3 race at Monza after problems hampered Jimmy Eriksson on the penultimate lap.

The race started under strange conditions with stallers on both the formation lap and the actual start itself. Second on the grid Alex Palou spun off into the barriers on the main straight while doing burnouts, but was able to take the start.

Once the race was pushed forward a lap, the second start saw Alex Fontana keep his reverse pole spot into the first corner while Palou dropped back behind both Matheo Tuscher and Eriksson.

The first few laps were hard fought between drivers such as Esteban Ocon, Marvin Kirchhofer, Emil Bernstorff and Kevin Ceccon.

Kirchhofer was the first to pass the ailing Palou while Bernstorff pulled of an accidental overtake into turn one on Ocon, as his lock up turned into a late dive forcing the Frenchman to get out of the way.

Over speed coming out of the Curva Grande put Tuscher too close to the back of Fontana and the pair made contact. Fontana was able to hold onto first but Tuscher dropped down the field.

Eriksson would take the lead over Fontana into lap four as the Swiss driver battled with a broken car. Kirchhofer would then pull off an amazing overtake around the outside of Ascari on Fontana for second place.

Fontana, Bernstorff, Ceccon and Ocon would battle it out for a few laps before the French driver succeeded in staying ahead into third position.

By now, pole man for race one Luca Ghiotto had caught and passed drivers in the points from 19th on the grid, and made an easy pass on Fontana for fifth.

Fontana was then involved in an incident with Bernstorff, as the English driver was sent flying over the sausage curbs at the first chicane, forcing him to retire on the spot.

Ghiotto pulled his way up to Ocon and Ceccon who were fighting for third, and was able to pass his fellow Italian with relative ease going into turn four.

After leading the race since lap four, Eriksson?s car suddenly slowed on the back straight after an apparent fuel issue.

On the last corner of the penultimate lap, Kirchhofer was able to easily drive right around the Swede and hold onto first position until the end of the race

Ocon and Ghiotto completed the podium, with the ART driver claiming his seventh second place finish in as many races, followed by Ceccon and the struggling Eriksson, whose car gave way at the end of the pit-lane.

The Jenzer pair of Tuscher and Ralph Boschung followed them in sixth and seventh, with eight place going to Sandy Stuvik.