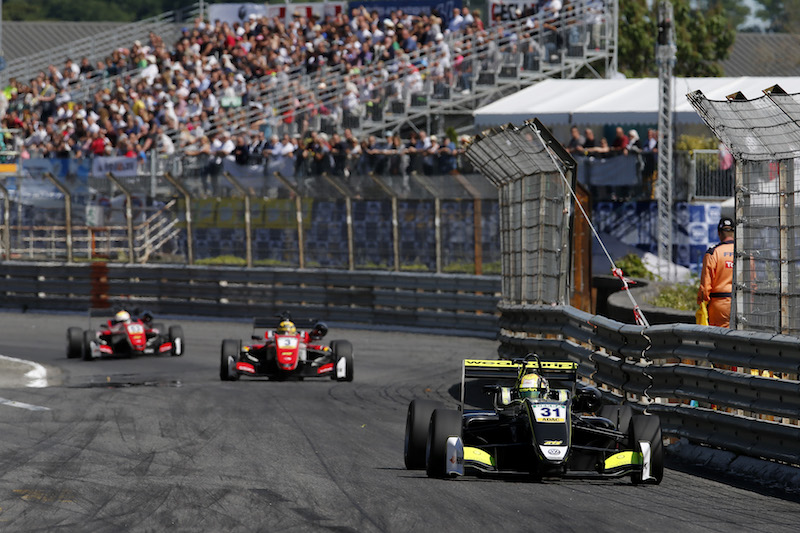 Lando Norris insists there is more to the strong form of the Volkswagen-powered teams in the Formula 3 European Championship this year than any perceived engine advantage.

Carlin rookie Norris is currently tied for the series lead with Motopark driver Joel Eriksson, with the two VW-propelled drivers having won five of the nine races held so far this season between them.

The Monza round in particular, where Carlin locked out the top three places in the first qualifying session and race, triggered talk of a power advantage for the Spiess-tuned Volkswagen unit over rival Mercedes.

Current F3 engines have been homologated since they were introduced in 2014, with modifications permitted only for reliability reasons. VW is understood to have made such changes prior to last November?s Macau Grand Prix, according to Autosport, following a spate of failures that affected Motopark in particular at the end of last season.

Speaking during the Pau weekend, Norris said that Carlin and Motopark and their drivers were simply performing better than their rivals had expected, rather than benefiting from power gains.

?We have all the data to go through, we got [Mercedes-powered Prema driver Callum] Ilott?s data [from his pole lap in first qualifying] and there?s literally zero difference in straight-line speed, so I don?t think there?s anything anyone can complain about,? he said.

?Here we run as much downforce as possible, so if you could see a difference [between engines], it would also show here.

?I think obviously Motopark and ourselves at Carlin are doing a very good job. I think we?ve worked hard over the winter. I think it?s just caught people out that we?re doing a better job than what they expected.

?We?re all good drivers, especially in Carlin; the four of us we work well together and push each other a lot. So I think it?s more just that they didn?t expect the pace that we could have.

?I don?t think there?s anything to complain about.?

One driver from a Mercedes-powered team later told Formula Scout that he believed the data from Norris? double pole in second qualifying (held after the Briton?s comments on the matter) did in fact indicate a power advantage.

However, Maximilian Gunther, who is currently the best-placed Mercedes driver in the standings and just two points behind Eriksson and Norris after his double win in Pau, has played down the issue.

?To be honest I was never the one who complained about anything,? Gunther, who is a reserve driver for the Mercedes DTM programme, said to Formula Scout.

?I think everyone is pushing as much as they can: the teams, the engine manufacturers, and I?m happy to have a Mercedes-Benz engine.

“As we saw this weekend, we can win two races, and I?m just really happy and thankful to Mercedes and Prema Powerteam that we did such a good job this weekend.?