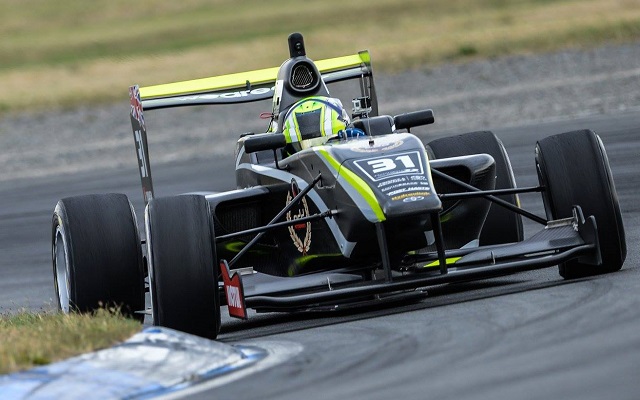 Lando Norris scored his first Toyota Racing Series victory from sixth on the grid in the wet race two at Ruapuna.

Starting second, Pedro Piquet snatched the lead from reverse-grid pole-sitter Jehan Daruvala, followed by Timothe Buret, who made up an impressive amount of nine places by the end of lap one.

Daruvala on the other hand, dropped down to ninth and lost further positions throughout the race to finish 13th.

Similarly to yesterday, the safety car made a visit after a handful of laps and Buret found himself overtaken by James Munro, Norris and Guan Yu Zhou at the restart.

Munro, now running second, couldn’t keep the spot?for long though as he crashed out at the hairpin, neutralizing the action once again.

Piquet managed to stay ahead at the second restart but he soon came under massive pressure from Norris as the duo pulled?away from the rest.

The Briton made a successful move with three laps to go and stretched his advantage to?four seconds as he crossed the finish line.

Piquet ended up second ahead of Ferrari junior Zhou, who made a late move on Artem Markelov, the Russian locking out the top four for M2 Competition.

Buret settled for seventh, keeping yesterday’s winner and slow-starter Ferdinand Habsburg at bay as the top ten was completed by Bruno Baptista and Brendon Leitch.

UPDATE: Owen received a ten-second penalty for weaving behind the safety car to drop back to 12th and allow Devlin DeFrancesco?to enter the top ten. In addition, Nicolas Deparo has been excluded for carleess driving.