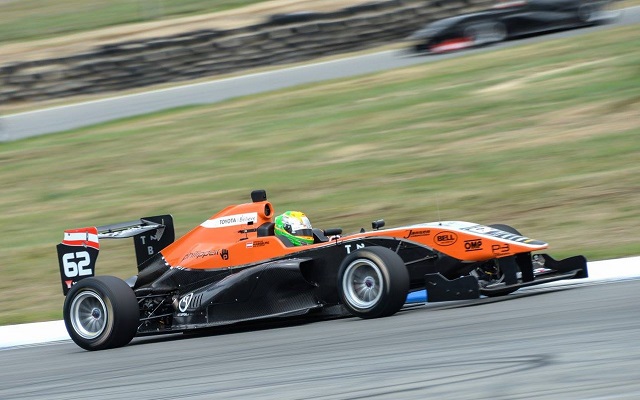 Ferdinand Habsburg was victorious in the 2016 Toyota Racing Series opener at Ruapuna?to secure his first single-seater victory of his career.

Habsburg had the better start of the front row starters, stealing the lead from pole-sitter Lando Norris and quickly pulling away to lead by more than a second by the end of lap two.

The race was neutralised shortly after that though?after?Kami Laliberte got his car stuck in the gravel trap, which prompted the safety car.

Habsburg couldn’t quite pull away from Norris after the restart?as the Briton challenged him for the lead, however, the Giles driver eventually built a safe gap.

Instead of going for the win, Norris soon had to switch his focus on the charging Artem Markelov and dropped back to third in the closing stages.

James Munro and Guan Yu Zhou made it home in fourth and fifth respectively after both losing two places at the restart but gaining one of them back by overtaking Brendon Leitch, who settled for sixth.

Local debutant Taylor Cockerton was running seventh but lost two positions to M2 duo Pedro Piquet and Jehan Daruvala to?drop back to ninth, while the top ten was completed by Frenchman Timothe Buret.