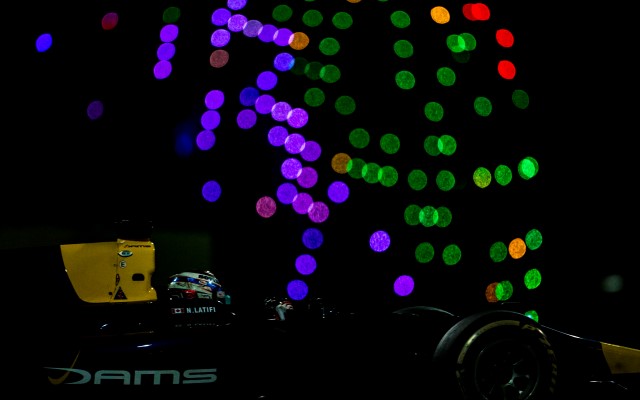 Nicholas Latifi went one better in his GP2 tests with DAMS to top the evening session on day two in Abu Dhabi.

Driving the car taken to three poles in the final four events of the season by Pierre Gasly, Latifi had been second quickest on Wednesday evening and then again on Thursday morning.

The evening action, having already been delayed by quarter of an hour because of an incident at the end of GP3 running, was halted for around 40 minutes when Felix Rosenqvist crashed his Prema car due to a stuck throttle and hit Tecpro barriers.

After the restart with an hour and 20 minutes left, Latifi – who contested four GP2 rounds this year with MP Motorsport – took over at the top of the times with a 1m47.860s.

That was over a second faster than Artem Markelov‘s morning benchmark, and marginally faster than Nobuharu Matsushita went on Wednesday.

Mitch Evans was ninth on his day with the Campos team he’s expected to race for next season, with Jordan King 10th for Racing Engineering.

GP3 graduate Jimmy Eriksson narrowly missed out on the top 10 but was the best GP2 newcomer in 11th.