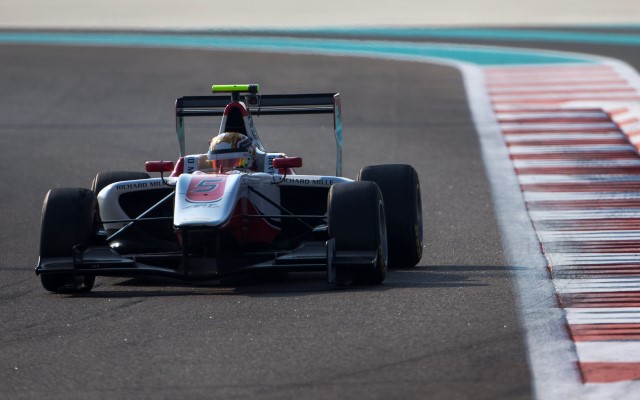 Charles Leclerc returned to ART Grand Prix for the final day of GP3 testing in Abu Dhabi and promptly topped the times in the morning session.

After setting the pace on the opening day with ART – the team he’s expected to race for next year – the Monegasque star spent day two with Arden.

Now back with the French squad, Leclerc claimed top spot in the morning with around half an hour remaining.

His time of 1m55.115s was the best of the test so far, two hundredths up on Antonio Fuoco‘s day two time.

Kevin Jorg took second, 0.058 seconds down on Leclerc as he moved into the Arden line-up.

ART beat Arden for third too, with Alex Albon pipping Jake Hughes for the place.

Leonardo Pulcini moved up the order to fifth after switching from Jenzer to Trident, faster than Koiranen’s Matt Parry and Jack Aitken, now testing a Status car while under evaluation for new team DAMS.

Konstantin Tereshchenko took eighth for Campos, followed by Ralph Boschung at Arden and Fuoco at Status.

One newcomer for the final day is Italian Formula 4 racer Marcos Siebert with Jenzer, 20th quickest of the 21 drivers in the morning session.