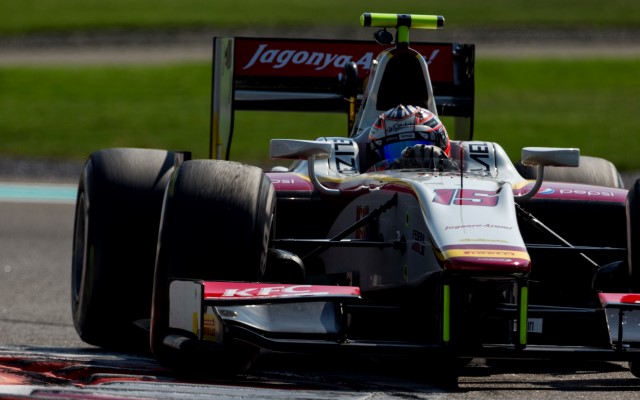 Mitch Evans went four thousandths of a second faster than Oliver Rowland to top the times in the morning session on the third and final day of post-season GP2 testing in Abu Dhabi.

Having taken over Alex Lynn‘s seat at DAMS for day three, Rowland led the way with an hour to go but his time was bettered in the closing stages by Evans.

The four-time GP2 race-winner has been testing with Campos Racing amid reports he will be team-mate to Sean Gelael at the Spanish squad next year.

GP3 runner-up Luca Ghiotto switched to Rapax for day three and claimed third ahead of team-mate Andre Negrao and the team’s 2015 racer Sergey Sirotkin, who has switched to Prema.

Day one leader Nobuharu Matsushita was sixth on his return to the ART cockpit, just ahead of Tio Ellinas of Trident.

Stanaway triggered one of four red flag periods when he stopped on track. Gelael spun and Artur Janosz stopped early on, while Pierre Gasly later came to a halt with a gearbox issue after returning to Prema for the final day.

Despite his problems, the Frenchman was still quicker than Salvatore del Plano, the 41-year-old a new addition to the test at MP together with Andrea Caldarelli at Russian Time and GP3 frontrunner Emil Bernstorff at Arden.