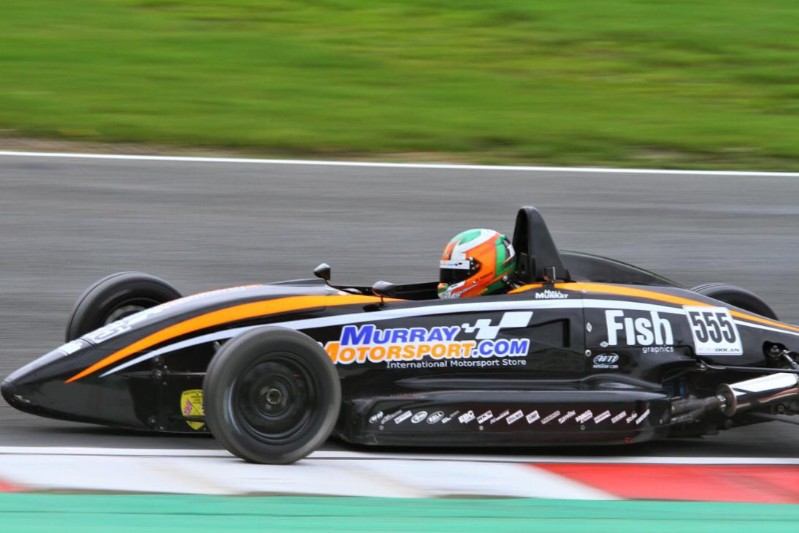 Niall Murray led a Team Dolan one-two in the second Formula Ford Festival semi-final; a race that had to be restarted after a chaotic beginning.

Category returnee Murray led comfortably from pole for the first lap, but faced red flags on the next tour after Peter Lucas span at Paddock Hill Bend and was collected by Steve Barlow.

David McCullough was also involved, and the resulting clean-up required the race to be stopped.

As less than two laps had been completed, the original grid was used and nullified strong starts from the likes of Rory Smith and Peter Dempsey.

In the restarted encounter, Murray and team-mate Chris Middlehurst once again pulled away, with only a safety car intervention putting their control of the race under threat.

Dempsey had tried passing Smith around the outside of Paddock Hill Bend for third, and tried again at Druids. Cliff Dempsey Racing driver Dempsey ended up going off track, which put defending Festival winner Joshua Smith off too, while B-M Racing’s Rory Smith retired.

Dempsey tried attacking Cooper but instead fell behind Huffaker, and it took several laps for him to reclaim the position. Green, who locked up on the main straight to avoid hitting Rory Smith early on, came home behind them in sixth.

Ciaran Haggerty took seventh after dueling with Jamie Sharp, who ended up being shuffled down to 22nd during their heated battle and recovered to 17th.

Joshua Smith made his own recovery to 14th, helped by some chaos when the safety car came out, but will have to contest the Last Chance Race to reach the Final having failed to finish in the top 12.