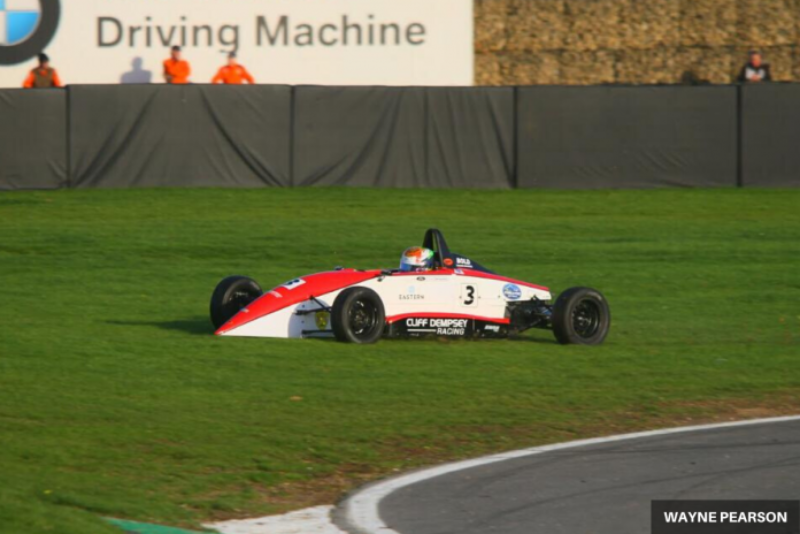 Ivor McCullough won the Last Chance Race to make the final of the Formula Ford Festival, while a previously disqualified Peter Dempsey failed to finish.

Team DDR’s McCullough had a strong start from pole, and despite a gearbox problem managed to stay clear at the front of the five-lap race, crossing the line 1.613 seconds ahead of B-M Racing’s Jamie Sharp.

Sharp had started sixth, and carved his way through to second despite have having a moment on lap two when Don Hardman Racing’s Rick Morris defended hard ahead of him and he had to put two wheels on the grass on the outside of Surtees.

Ryan Campbell battled hard with Sharp for the remaining three laps, with the pair swapping positions.

Sharp’s team-mate Rory Smith had a great performance, making his way from 26th to secure fourth, while Team Canada scholar Jonathan Woolridge ended up fifth, ahead of Enigma Motorsport’s Jack Kemp, who secured the last available spot for the Festival final.

B-M’s James Hadfield just missed out in seventh, while Morris eventually finished in eighth after an eventful five laps in which he came under pressure from Dempsey.

A collision with Rory Smith led to Dempsey being disqualified from his semi-final, but he was allowed to start the Last Chance Race from the back of the grid. He’d made it up to 13th within a lap and had closed in on Morris to make a move on the Classic FF1600 champion coming out of Druids, but Morris defended hard, forcing Dempsey on to the grass.

Having taken a substantial amount of time to return to track, Dempsey then decided to pull off and end his race a lap early.

Colm Blackburn and Adam Fathers rounded out the top ten.

Richard Davison had been due to line up eighth on the grid, but failed to appear.