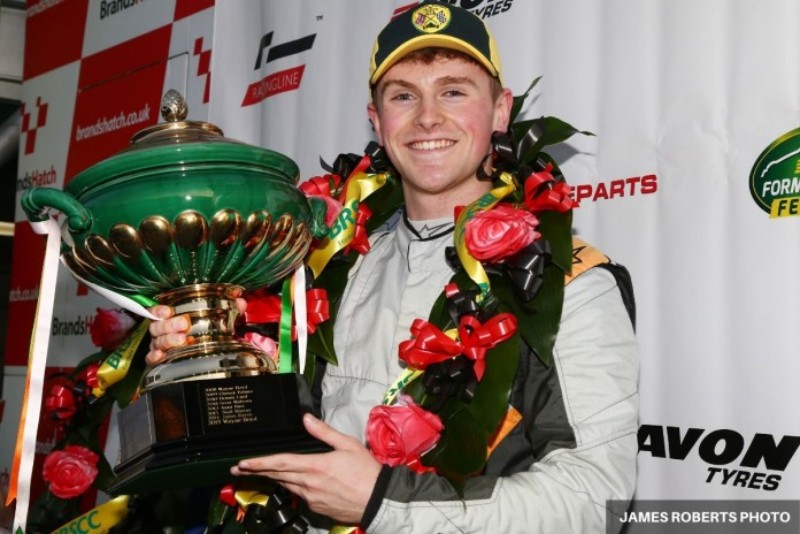 Cliff Dempsey Racing’s Jonathan Browne took a dominant victory in the final of the Formula Ford Festival final, despite the best efforts of Team Dolan.

The result completed an imperious weekend for Browne, who also won his heat and semi-finals convincingly from pole. He had only won a single FF1600 race prior to the weekend.

Browne never looked seriously threatened in the Festival?s final either, especially after a safety car period that ran through the early laps to retrieve the car of his team-mate Jonathan Woolridge, who had electrical problems on the grid.

Niall Murray finished second for a second year in a row for Team Dolan, while team-mate Matt Cowley just held off Kevin Mills Racing’s Michael Eastwell to complete the podium.

Three-time Festival winner Joey Foster finished fifth, just over a second behind Eastwell. They were followed by a multi-car battle which was headed at the flag by reigning BRSCC National FF1600 champion Ross Martin.

Martin’s position came at the expense of Luke Cooper (Swift Cooper) and Chris Middlehurst (Dolan), both who had been higher up the order at times. Middlehurst was actually in third place early on, but had a frustrating race.

CDR’s Team USA scholars Scott Huffaker and Josh Green completed the top 10, with a charging Max Marzorati being the top B-M Racing driver in 11th and just holding off Graham Brunton Racing’s Ciaran Haggerty, whose mentor Dario Franchitti was watching from the paddock.

Noel Robinson was the top privateer in 14th, while Rory Smith (B-M) came from the very back to finish 17th. New Zealand FFord graduate Callum Crawley had a dissapointing end to a strong weekend when he retired a few laps from the end.