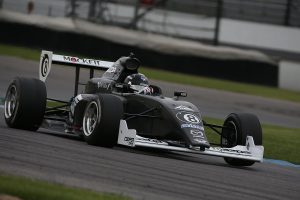 The new Tatuus PM-18 made it’s official debut in the Pro Mazda test, with 2017 USF2000 champion and Cape Motorsports driver Oliver Askew christening its arrival by setting the fastest time.

His test-topping time of 1m19.814 broke the previous track record for the championship by three seconds, and immediately makes the young American one of the favorites for the 2018 title.

?It feels like home except I am going five seconds quicker (than in the USF2000 car),? said Askew.

?It?s the same seat, the same cockpit but the engine is obviously tuned up a lot more so I am having an absolute blast. This is the fastest car I have ever driven in my life. It is a great experience, especially to do it here at Indianapolis where we have had a lot of success this year, too.?

The PM-18 is based on the same underpinnings as the USF-17 used in USF2000, but has enhanced aerodynamics and a more powerful engine. 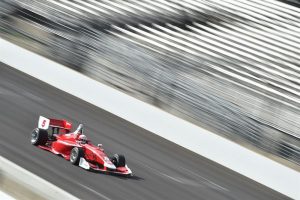 The Frenchman’s 1m15.7173 was 0.0635 seconds faster than 2017 team-mate Colton Herta in his usual?Andretti Steinbrenner Racing car. There were only three other Indy Lights regulars in the 12-strong test, with most of the cars being occupied by Pro Mazda and USF2000 graduates.

Most impressive of these was current Pro Mazda champion Victor Franzoni, who ended the test in third for Juncos Racing, only 0.0840 seconds off the pace.

?This is awesome,? said the Brazilian after the first session of the test.

?It was my first time in the car and I finished second to Nico by just three-tenths. He has already done a full season so I?m really happy. The car is unbelievably fast. It is a huge difference from the [older] Pro Mazda to Indy Lights but it?s fun. I have a lot to learn and I?m excited.?

Patricio O’Ward, who failed to find a seat in Indy Lights this season after the first two?rounds, finished the test in fourth ahead of a planned return to the series with Team Pelfrey.

USF2000 vice-champion Rinus VeeKay stepped up two categories and ended the test in fifth for BAR. The Dutchman topped two sessions, and ended the test four tenths off the fastest time in his first time in a high downforce car. This winter he will also be testing for Fortec in a World Series Formula V8 3.5 car, and is set to compete in the MRF Challenge for a second time.

Newman Wachs Racing’s Darren Keane topped the USF2000 test from Pabst Racing driver Andres Gutierrez. Both drivers failed to stand on the podium in the series this year, but between them topped all eight test sessions at IMS.

“[Getting the fastest lap of the test] is a good boost in confidence for me heading into next year,” said Keane.

“I am really happy with how everything is going with the team. They are a great group of guys and it?s just really good to see us improving and being where we want to be. I am really looking forward to the series next year. I had such a great time last season.”

?We have been going in a positive direction. This is my first time testing for Pabst and it has been an amazing experience. I have learned a lot this weekend and feel I can be capable of winning the championship next year if I can continue this way.”