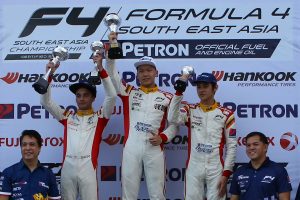 Cao was beaten to pole by native driver and track specialist Ben Grimes, and the Filipino beat the Chinese driver to victory in his first race back since pausing his racing career for studies.

In the second race the rivalry continued, with Grimes holding the lead for the first half of the race until a mistake pitched him into the wall and handed Cao victory. Grimes?s younger brother Sam made up for his demise by racing from the back of the grid, due to spinning out at the beginning of the first race, to second place.

The grid for the third race was set by the reversing the top four finishers of the second race, meaning Cao started in fourth, and with the elder Grimes down in last.

Cao overtook two cars to move up to second on the first lap, with Grimes passing three to move up to fifth. On the second lap he passed his brother for fourth, and on the sixth lap he cleared Adam Khalid, another returning from studies, for second place.

Cao was already several seconds up the road though, and he finished the race was almost 10 seconds in hand.

Starting from the front for the first in the weekend, the fourth race was an easy one for Cao, and he took his third straight win by 12 seconds. Ben Grimes was second, with the final podium spot going to Kane Shepherd after a clash with Khalid that eliminated the latter driver from the race.

Fastest lap for Grimes meant he started the fifth race from pole, but a poor start meant he lost that advantage immediately.

Cao took the lead, with Grimes Ben and Sam behind. Unlike in the other races, Cao did not pull away and ?steering issues? meant he returned the lead to the first Grimes on the next lap.

Cao held off the younger Grimes for the rest of the race, gifting elder sibling Ben a three second margin of victory.

Typhoon Paolo struck prior to the final race of the weekend, leading to it being reduced to five laps.

The first three laps ran under the safety car, and once racing got under way Cao wasted little time in moving into the lead.

His pressuring of Sam Grimes for third led to the Filipino spinning, and promoting brother Ben to third behind Shepherd.

?I won three races in Sepang and four here. I?m looking forward to the next event in Indonesia,? said Cao, who leaves the Philippines with a 91.5 point championship lead over Shepherd.

Ben Grimes is third in the standings, with the absent Nayan Chatterjee, who was celebrating his birthday, dropping to fourth.

Nazim Azman has dropped to fifth, having competed in the clashing SMP F4 round at Assen this weekend instead, and will likely drop down the standings even further having made it clear he is less than likely to be racing in the series again this season as he concentrates on his Spanish F4 commitments.

The next round takes place at Sentul International Circuit on November 24-26. 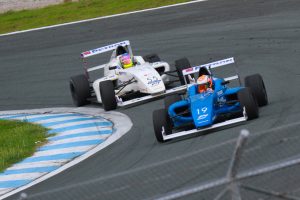