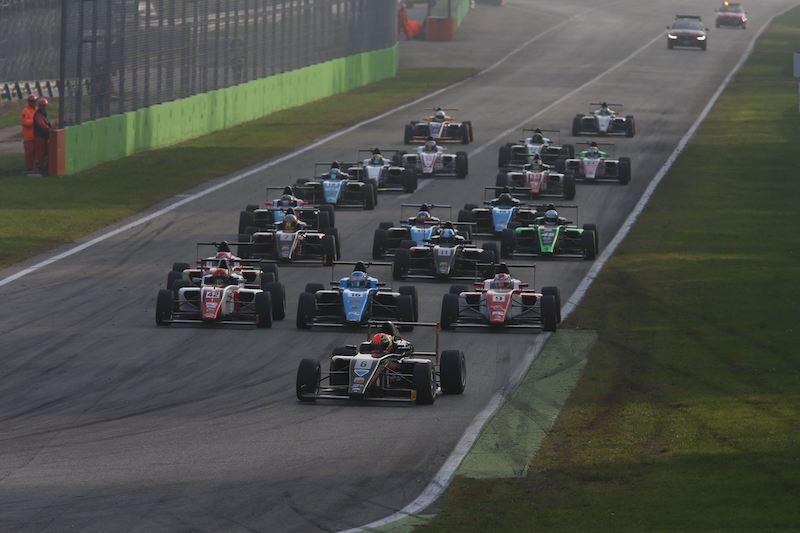 Italian Formula 4 champion Marcus Armstrong won the last race of the season of Monza on the road, but a penalty for his part in an unusual crash handed the victory to Lorenzo Colombo instead.

Both drivers were part of an exciting four-way battle for the lead with Artem Petrov and Job van Uitert in the early stages, after Colombo had led away from pole position.

On the second lap, Artem Petrov battled his way cleanly past Colombo in the second chicane, despite having the outside line on the entry, and van Uitert and Armstrong both capitalised on Colombo’s lost momentum to follow him past.

By the end of the lap, van Uitert had swept into the lead ahead of Armstrong, who then drafted past the Dutchman into the first chicane to lead with Petrov, van Uitert and Colombo in pursuit.

The order among the top four had remained the same until the end of lap five, when Armstrong defended the inside line into Parabolica, only to cut across on turn-in, dislodging Petrov’s front wing.

DR Formula driver Petrov, in search of a hat-trick of wins at Monza, was able to stay with Armstrong and tried to make a pass into the second chicane, but struggled to get his car slowed down with its lack of downforce and locked up and ran straight on.

Upon rejoining the circuit on the exit of the chicane he collided with van Uitert, who had been forced over to the right-hand-side of the track after getting a run on Armstrong.

While Petrov and van Uitert were eliminated on the spot, Armstrong continued unscathed through the subsequent safety car period, and was able to immediately respond when Colombo passed him at the restart.

Another safety car followed soon afterwards after?Felipe Branquinho spun and stalled at Parabolica, and it was during this that Armstrong received notification of a 25-second penalty, which race control said was for the incident that took van Uitert and Petrov out of the race.

Armstrong was able to remain at the head of the field until the end of the race, but the penalty relegated him to 10th position and gave Colombo his second win of the year, enough for the Bhaitech driver to secure third in the standings.

Olli Caldwell scored his best finish in Mucke Motorsport’s Tatuus-Abarth in sixth in front of Federico Malvestiti, who had pitted for damage early on.

Davide Vendetti scored his first points of the season in eighth with debutant Federico Casoli in ninth.