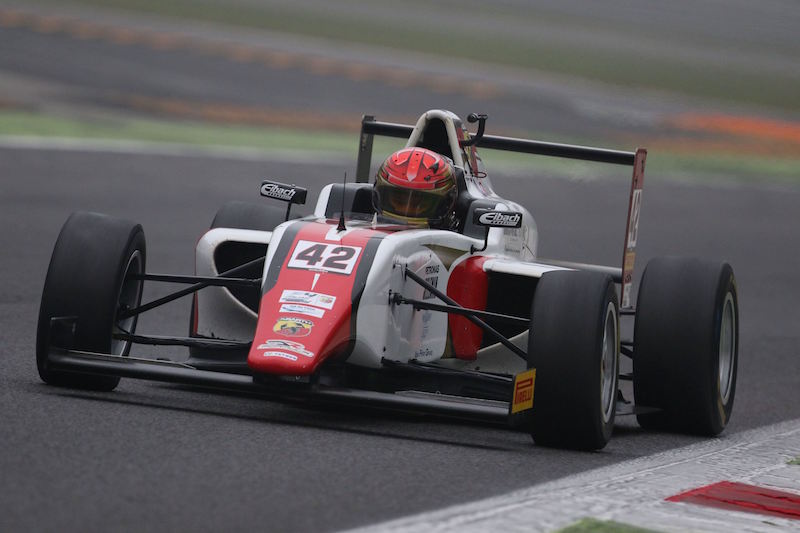 Artem Petrov claimed a dominant second win of the weekend at a wet and gloomy Monza as Job van Uitert and Marcus Armstrong charged from the back to the podium in race two of the Italian Formula 4 season finale.

The miserable conditions meant the race started behind the safety car, and Petrov took the lead from pole-sitter Lorenzo Colombo into the first chicane at the restart, even though he completed the move by taking the escape route.

Along with a number of other drivers, Petrov was handed a five-second time penalty for not respecting track limits, but in his case it would prove insignificant, as the DR Formula racer took the chequered flag 17 seconds ahead of the next driver.

That next driver would be van Uitert, who staged a remarkable recovery after having to start from the pit-lane due to an issue with his car.

For much of the race it was the Bhaitech duo of Colombo, Sebastian Fernandez and Leonardo Lorandi that fought over the last two steps on the podium, but they couldn’t resist the pace of van Uitert, despite the Jenzer driver spinning in his attempts to battle through.

Passed by van Uitert into Parabolica for the penultimate time, Lorandi crossed the line third but took a five-second penalty for track limits, relegating him to seventh and putting newly-crowned champion Armstrong onto the podium.

Prema-run Ferrari junior Armstrong had started from the back of the grid after the engine-related issue that eliminated him from the second of Friday’s qualifying sessions.

All five Jenzer cars ran together on track at one stage, with Giorgio Carrara, Federico Malvestiti and Giacomo Bianchi rounding out the top 10 finishers.