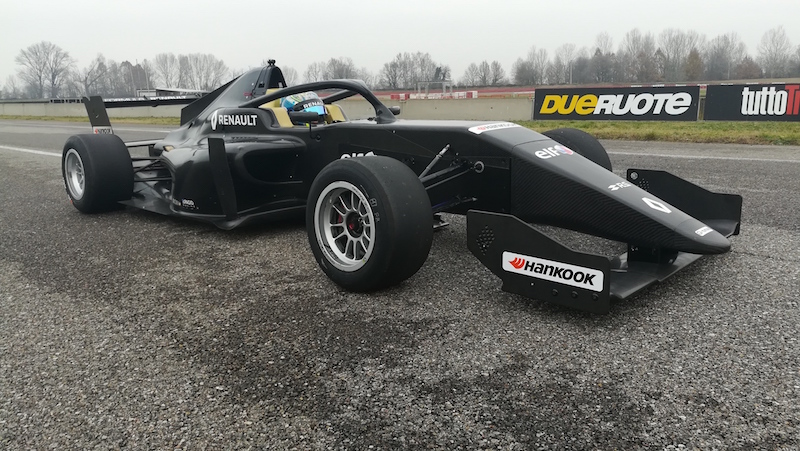 The new regional Formula 3-specification car to be used in the Formula Renault Eurocup from 2019 was given its first public outing on Friday by reigning champion Max Fewtrell.

Fewtrell, who is set to race for ART Grand Prix in FIA F3 next season, clocked 250 kilometres with the car at the Vairano circuit south of Milan on Friday.

“It has been a huge honour for me to drive the new Formula Renault chassis number 1 and I would like to say thanks to Renault and its partners for this opportunity,” he said.

“My first impression is really good. Straight away, I felt the car was evenly balanced and it just feels really nice in the corners.

“The additional power nicely compensates for the weight increase due to the introduction of the different safety elements, including the new anti-intrusion side panels and the halo – when you?re pushing you don?t even notice there is one.

“I?ve had a good experience as well with the Hankook tyres in previous championships and it?s living up to its reputation as it allows for getting the most from the extra downforce the car offers, especially in the high-speed corners.

“Overall, I had a terrific time and it looks like it?s the perfect fit for the next generation of Formula Renault.”

The FIA World Motor Sport Council recently increased the number of superlicence points awarded to the Eurocup champion from 10 to 18, although gave the rival European Regional Championship up to 25.

“Enthusiasm has grown among our current and prospective customers as soon as we unveiled the new Formula Renault,” said Renault Sport Racing’s commercial director Benoit Nogier.

“This public outing was a perfect occasion to show the progress made since October as the first cars will be delivered next month. We are really excited for the season to begin so we can watch the top talents of this generation battle.

“In addition, we are delighted with the extension and revaluation of the FIA superlicence points awarded to the best drivers in the Formula Renault Eurocup.

“This is a true testament to the work we have been doing for several years to provide the drivers with the best tools to reach the motor racing pinnacle.”