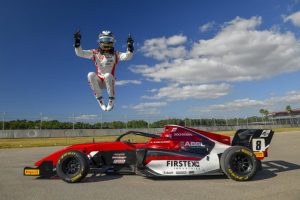 Two new FIA-backed continental Formula 3 championships appeared on the scene in 2018, joining the list of series across the globe at that level, from Australia to Italy.

As soon as leading European F3 team Hitech GP put its name down on the entry list, it was pretty clear that one of its drivers would be winning the inaugural FIA Asian F3 title. Its pick of drivers included GP3 winners Raoul Hyman and Jake Hughes, and Macanese teenager Charles Leong. With Hughes simultaneously competing in GP3 though, it meant the team would need a replacement for two rounds.

Ben Hingeley took that spot for the second round of the season, with Euroformula Open champion Harrison Scott taking his place in the season finale. When Hughes was on track, he was literally unbeatable, taking an uninterrupted run of wins and poles, and only being beaten to one fastest lap by Super License’s Tomoki Takahashi.

This meant the season became a story of how the main title contenders did in Hughes’s absence, but their form when he was present meant only one went into the Sepang title decider in a position to beat his points tally.

The driver in question was Hyman, who missed the podium on three occasions, but only managed one win while Hughes was gone. This occurred at the first Ningbo round, where Hingeley won on his debut but then retired from race two with gearbox issues. Mechanical problems for Takahashi also made Hyman’s life a little easier in that race, where his main rival was Absolute Racing’s Jaden Conwright. 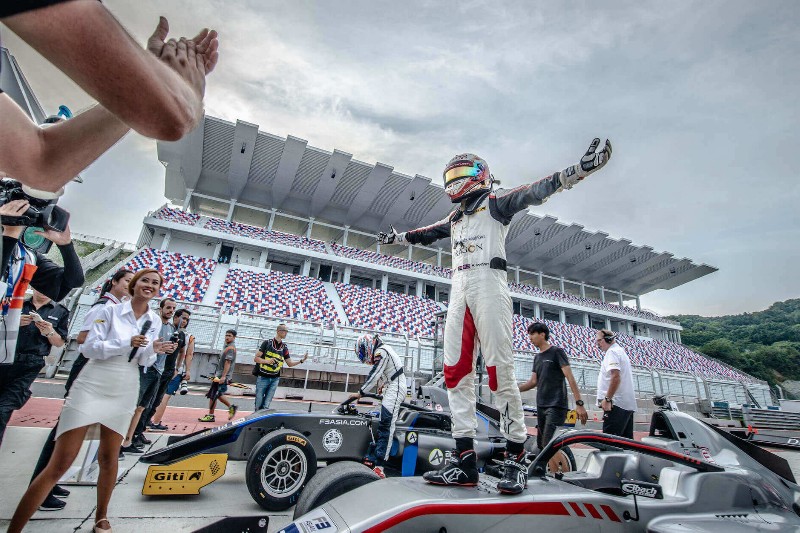 Conwright was the breakout star of the season, taking two poles and then a win in the third of the Ningbo races. The 19-year-old spent last year working with Carlin, and prior to that had finished 30th in Italian Formula 4. He was almost always the top non-Hitech driver, and went into the final round in a position where he would’ve lost the title only on wins countback.

In the final round of the season both he and Hyman were off the pace though, finishing fifth and sixth in the first race. In the second race an aggressive pass on Louis Prette got Hyman third, but a lap one incident left Conwright 14th. They, and highly rated F3 driver Scott, were utterly outclassed by Pinnacle Motorsport (in partnership with B-MAX Racing) driver Liam Lawson and Absolute’s Yifei Ye. Both were new to F3, the Sepang circuit and racing in Asia, but were the pair to beat.

ADAC F4 runner-up Lawson won all three races, by a combined 35.582 seconds, while Formula Renault Eurocup star Ye managed third, second and eighth. Fifth place for Hyman was just enough to secure him the title, with Conwright consolidating third in the standings with with a podium, albeit 52 points behind Hughes.

With a total of seven drivers making an appearance throughout the season, there was not much to cheer about in F3 Americas bar the performances of runaway champion Kyle Kirkwood.

The 20-year-old, also the champion in USF2000 this year, won 15 of the 17 races and stood on the top step twice on the undercard at the United States Grand Prix, an experience he described as “surreal”. Kirkwood drove for Abel Motorsports, a team set up in 2016 for team founder Bill Abel’s son Jacob to compete in US F4.

The team’s F3 move worked wonders for Kirkwood, and also gave Abel Jr a chance to shine, taking four podiums in his 11 starts. Admittedly three of those came in a grid consisting of four cars, and the other in a season-best six. 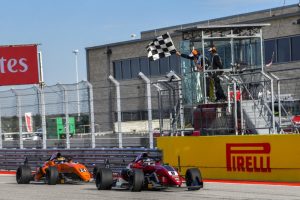 Global Racing Group duo Baltzar Leguizamon and Benjamin Pedersen were the only two drivers that could hold a light to Kirkwood, and Leguizamon was a two-time winner. The first win came thanks to a Kirkwood grid penalty at New Jersey, and the second after Kirkwood pitted from the lead at NOLA.

Pedersen attempted to challenge at Road Atlanta, but for every time he tried staying with Kirkwood, the leader took his pace to an extra level. Doubling up in US F4 helped Pedersen in the season ending Circuit of the Americas round, and the long back straight meant the Dane was able to go wheel-to-wheel with Kirkwood several times. He finished the final race of the season just a quarter of a second behind, and ultimately that was the closest anyone truly got to the champion without him suffering misfortune.

Bathurst 12 Hours class winner Harri Jones marked his first season in F3 with a title for Jones Racing. The Australian made his F3 debut in the final round last year, winning a race, and built up experience in the MRF Challenge over the winter.

Challenging Jones the whole year was Cameron Shields, a former National class champion and a Formula 4 frontrunner. Shields narrowly beat Jones to pole and the first won of the year at Winton, he looked to repeat the feat in race two before slipping on oil, but a win in the third race meant he left with the championship lead.

Shields took pole again at Queensland, but was jumped by Jones at the start of the first race, which decided the winner. A startline incident involving Shields’ Gilmour Racing team-mate Chris Gilmour and Jones granted Shields victory, and in the final race a near-miss lapping traffic didn’t stop Jones from pushing Shields right to the chequered flag. 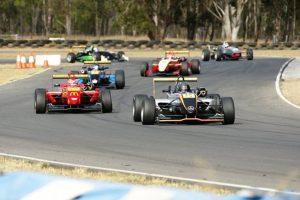 Jones took his first pole at Morgan Park, and he took an easy win after Shields stalled. He fought back to third behind National class driver Richard Peasey, setting the lap record on the way. Shields was the victim of traffic next time round, handing Jones victory in the damp. Wetter conditions in the final race played back into Shields favour.

At Sydney Motorsport Park, Jones took pole again, and moved into the championship lead with a triple victory. It wasn’t easy though, with an extra threat coming from R-Tek Motorsport’s John Magro, a two-time runner-up in the championship.

Wakefield Park’s qualifying session was the closest of the season, with just a tenth separating Jones and Shields. The races were completely different, with Jones dominating. His points lead heading to The Bend, a new addition to the calendar, was only marginal though.

Shields made history by taking pole there, but couldn’t hold on in the first race after being bettered by Jones at the start. He set the circuit’s outright lap record, but couldn’t match Jones’s start again in race two, leaving him 10 points down for the finale. A seventh win of the season wasn’t enough to steal the title, and Jones became the 20th Australian F3 champion. Roman Krumis, aged 62, took his second consecutive National class title.

Sandro Zeller took his fourth consecutive Remus F3 Cup title for his father Jo’s team,? and also took his third Swiss F3 title as the top driver from the country. The seven round Remus calendar was dominated by Zeller, and he was only beaten once over 14 races. That honour went to Monolite Racing driver Andrea Cola, who took four other podiums on the way to second in the standings. In similar style to the Swiss championship, Italian driver Cola also won the?FIA Central European Zone F3 title as the top CEZ registered driver. 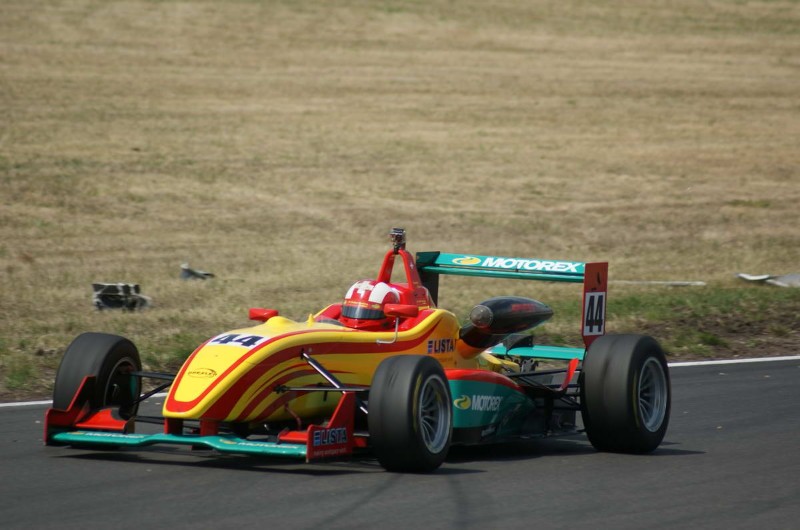 Sharing grids with Remus on four occasions was the Italian F2000 Trophy, which was won by Alessandro Bracalente, who also contested the Euroformula Open season finale and finished 12th twice. His Dallara F312 was ran by Pave Motorsport.

BOSS Ireland champion Cian Carey carried over the momentum from his race-winning 2017?MSV F3 Cup?campaign with Chris Dittmann Racing into this year, and was rewarded with a BRDC British F3 cameo. The 24-year-old Irishman won seven out of 16 races, but two retirements at the Donington Park opener meant it was University of Wolverhampton Racing’s Shane Kelly, runner-up for two years running, who initially led the standings.

It took a while for Carey to make it to the top, by which point CF Racing’s Stuart Wiltshire had marked himself out as his greatest threat. Towards the end of the season Carey made his British F3 debut with CDR, finishing in the top 10, and was supporting the British F3 races at Silverstone for both championships’ title deciders when torrential rain stopped the meeting. The extra points for pole meant Carey was crowned by 29 over Wiltshire, with Kelly a further three behind.

After winning the first race of the season, reigning champion Jacopo Sebastianini intermittently appeared, while British F3 and F3 Cup team boss Chris Dittmann replaced one of hiss ill drivers at Rockingham to win two of the three races.