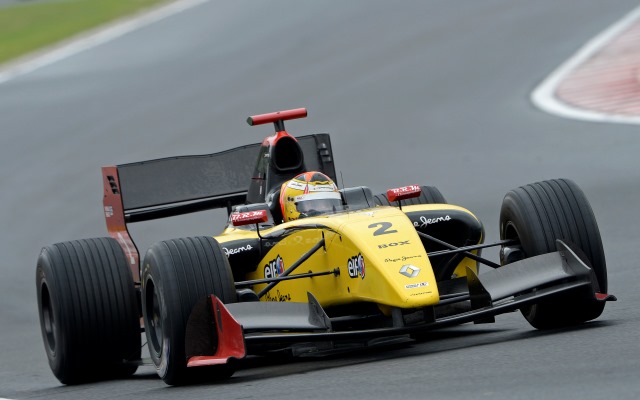 Norman Nato caused an upset in the second Formula Renault 3.5 race of the weekend at the Hungaroring, getting the jump on title contenders Roberto Merhi and Carlos Sainz at the start to get his second win in the category.

The race had been billed as a fight between the front row starers form man Merhi and points leader Sainz, but the latter’s DAMS team-mate Nato got the best start from third on the grid to pull into the lead into turn one.

Behind that, there was multi-car collision that ended with Oscar Tunjo upside down in the run-off area. It appeared to be triggered by Sergey Sirotkin and Will Stevens banging wheels on the inside of the corner, sending Sirotkin to his left and taking out Nicholas Latifi, Tunjo and Will Buller.

A lengthy safety car was necessary to extract Tunjo from his car, and there were 26 minutes remaining when the race resumed.

Nato, who had friend Jules Bianchi on hand to support him, stayed out later than Merhi to make his mandatory pitstop, but was able to continue in the lead. Merhi suddenly lost time in the middle sector with a few laps to go, giving Nato a two-second breathing space, but Merhi would close back up to within half a second before the finish.

Sainz had dropped to fifth exiting the first corner after his car made a slow exit, putting him behind Oliver Rowland and Meindert van Buuren.

Sainz and fellow Red Bull Junior Pierre Gasly opted for an early pitstop to get out of traffic, but Rowland was able to rejoin just ahead of them once he made his stop. As that happened, Sainz ran deep at the first corner, allowing Gasly to nip through.

Gasly would go on to pass Rowland on the pit straight for the second successive race, and was within a second of Merhi when the Spaniard lost time, but had to settle for his sixth podium finish of the campaign.

Rowland finished a further ten seconds back in fourth, under late pressure from van Buuren, who showed his sixth-place starting position was no fluke, staying out in the lead before pitting and rejoining in fifth to score his best result in the series and his first points since Spa.

Sainz lacked the pace to keep up with van Buuren and had to withstand the attention of Matthieu Vaxiviere in order to finish sixth. With two rounds remaining, Sainz’s lead has now dropped to 16 points over Merhi, who could make his Formula 1 race debut with Caterham in Singapore next weekend.