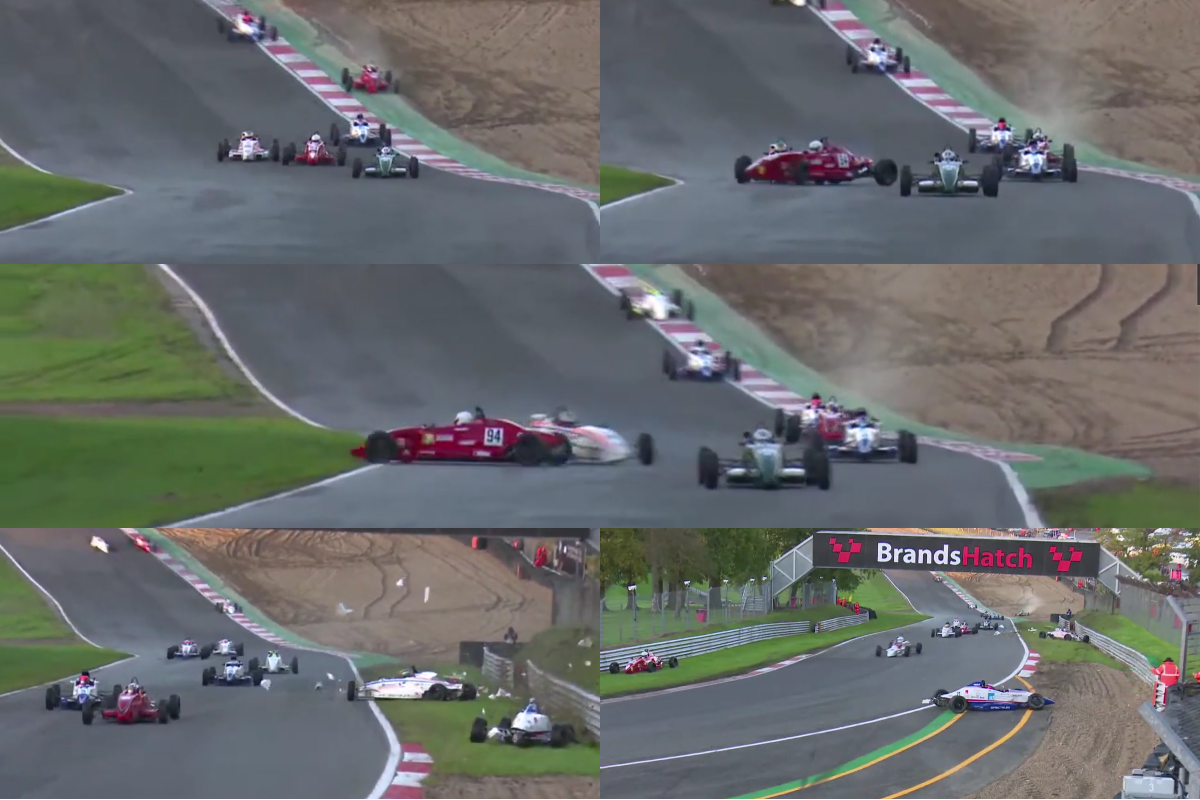 Formula Ford Festival victory contenders Niall Murray and Ollie White have admitted there was little they could do after touching wheels in the crash that removed both from the final.

Murray started on the front row at Brands Hatch after dominating his heat and semi-final, with White in third after coming second in both of his preliminary races.

White passed Murray at the start, then on lap four Murray went to re-pass and they collided, sending Murray into Kevin Mills Racing’s Tom Mills.

“The problem for all of us was it was very slippery into Paddock Hill, so it meant that every lap it was big oversteer moments through there,” White told Formula Scout.

“Niall had a good run on me, and I went to cover him off. I thought I left him enough room, but I’m not going to apportion blame until I’ve seen the footage.

“I did come over on him a bit. And then his front wheels touched my back wheel, and we had a big accident. That’s all that happened and it was very fast. It’s the nature of the beast. Luckily my car’s not too bad in terms of damage.”

“It’s actually not as bad as we thought,” was Murray’s damage summary after the clashes and barrier hit. “A few wishbones, mass dampers and stuff. And an ego, that’s about it.

“I’m fine. Thanks to the strength of the cars, Van Diemen is renowned to being a very strong car. So I’m glad I was in that sort of car in that crash, because to be fair it was quite a big one.

“[The crash] wasn’t my fault, I would put more blame slightly on Ollie, but again it’s the Festival final,” he added.

“I kinda put it down to a racing incident, it wasn’t malicious what he was doing, it’s a bit silly if anything but I was already up the inside. He didn’t do anything majorly wrong, it was just kind of one of those things, we touched wheels and as soon as we touched wheels we were gone. There’s nothing we could do about it.

“I had the best pace out there and the first couple of laps I made a mistake, let [poleman] Joey Foster up the inside and then onto a wet patch and that’s what let Ollie by.

“At Paddock, the inside three quarters of a car’s width was dry, the rest was wet.

“So if you went off line you were on the wet, that’s how he was able to get by when I was on the wet, and that’s how I was going to get by Ollie because he ran a little bit wide in Paddock, and I got a good run on him up the hill.

“I definitely had the pace, it was my race to win and we’ll be back next year stronger than ever.”