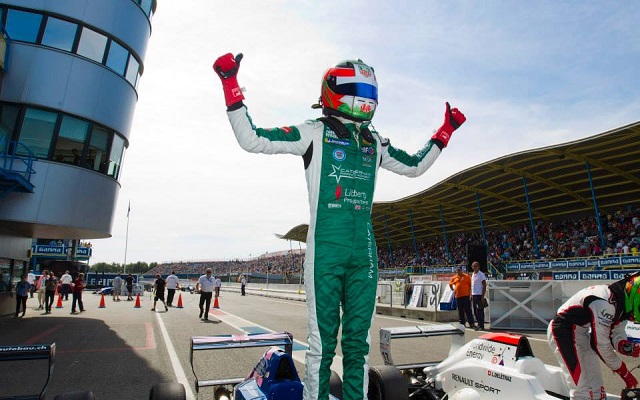 Fortec Motorsports driver Seb Morris notched up his second victory of the 2014 Formula Renault 2.0 NEC season in race two of the round at Assen.

The Welshman started the race from pole but lost out to teammate Ben Barnicoat over the opening lap. However, the Northamptonshire-based squad’s hopes of a 1-2 were immediately denied when Barnicoat’s engine gave up on the second lap, allowing Morris to retake the lead.

From that point on, it was a straightforward race for Morris, who had the pace on the rest of the field and gradually increased his gap to his rivals, eventually pulling seven seconds clear of anybody else.

Behind him, Josef Kaufmann Racing’s Ryan Tveter made a fantastic start from eighth on the grid to take third on lap one and then inherited second. He maintained position until the checkered flag, finishing two seconds ahead of teammate Louis Deletraz to claim his first podium in the series.

The Swiss driver appeared content with third, which, coupled with Barnicoat’s retirement, promoted him to the lead of the standings.

It was AVF’s Matthew Graham who took eighth on the road, but the Brit was, just as his French squadmate Jules Gounon, black-flagged due to an unserved drive-through penalty for not respecting yellow flags.

In the standings, Deletraz leads Schothorst by one point, with Barnicoat a further three down. Malja sits as best of the rest with 147 points to the leaders’ 184, 183 and 180.