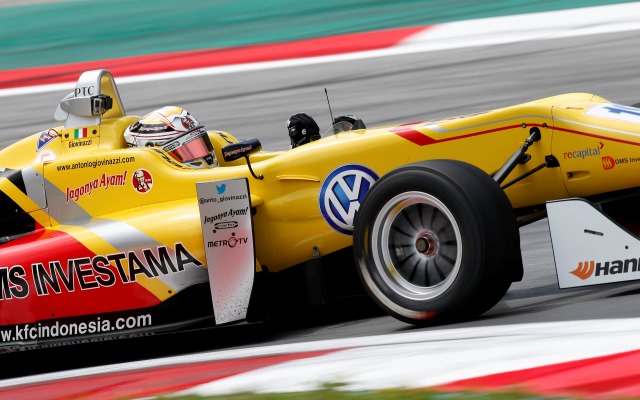 Antonio Giovinazzi completed his impressive weekend in the FIA F3 European Championship at Spielberg by clinching his maiden victory in race three as leading duo Esteban Ocon and Max Verstappen both lost points positions due to penalties.

Starting from pole position, Giovinazzi fended off an attack from his Jagonya Ayam with Carlin team-mate Tom Blomqvist through the opening couple of corners to retain the lead.

After a safety car period, Giovinazzi set a number of fastest laps as he pulled away up front, winning the race with a three-second advantage over Blomqvist, who took a win and two second places during the Austrian weekend.

Lucas Auer claimed a second podium finish from his home event in third, after getting ahead of race two winner Antonio Fuoco at the start.

Verstappen started fifth but fell back to eighth at the start, behind Nicholas Latifi (who started ninth), Jake Dennis (who started 11th after a penalty for contact with Verstappen in race two) and Jordan King (who stayed in seventh off the start). Ocon joined the back of the four-way scrap for fifth, after starting 14th due to a ten-place grid penalty for causing his race two collision.

Dennis attempted to pass Latifi, but came under attack from King. King was forced wide by his Carlin team-mate and Verstappen was able to pass him for seventh. Latifi then got very sideways at the final corner, allowing Dennis to take fifth. When Latifi attempted to fight back, Verstappen was once again ready to pounce and claim sixth.

Verstappen eventually got past Dennis for fifth and set off after Fuoco. He made a move at turn one but ran wide and then made contact with Fuoco’s front wing when he rejoined. Fuoco initially went ahead, before Verstappen completed the move. Fuoco was handed a black-and-orange flag forcing him to pit, and Verstappen was given a drive-through. He took the chequered flag in fourth but had 20 seconds added to his time, dropping him to 12th in the results.

That was 0.334s ahead of rival Ocon, who was relegated out of eighth when he was given a drive-through for not respecting yellow flags. His 13th place finish means he failed to score points in any races this weekend, but does remain 94 points ahead of Verstappen.

Latifi got back past Dennis to claim fourth, while Ed Jones beat King to sixth. Gustavo Menezes, Tatiana Calderon and Sean Gelael completed the top ten.

The safety car was caused by two separate incidents at turn five, which eliminated Felix Rosenqvist and Alex Toril respectively. Fortec pairing Alfonso Celis and John Bryant-Meisner were forced out in a turn one coming together at the start.