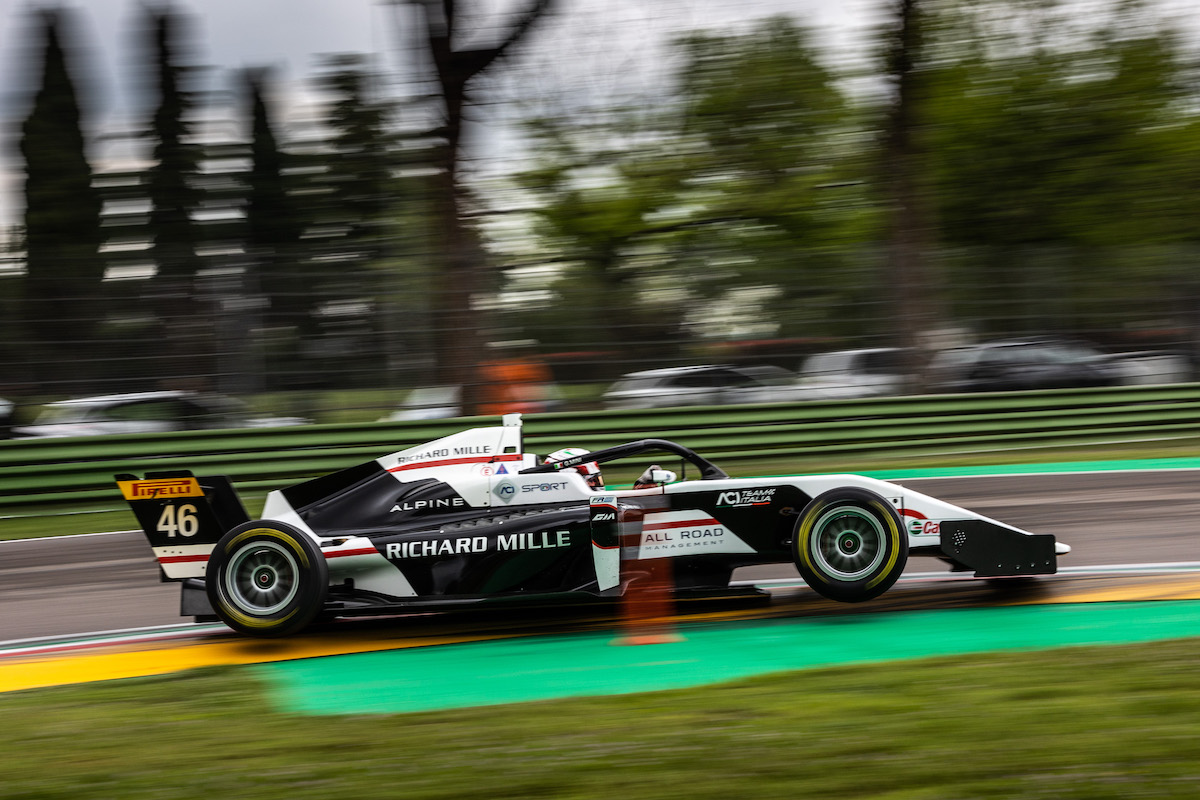 Gabriele Mini survived a mid-race downpour, multiple safety cars and a red flag stoppage to take his first ever victory in the Formula Regional European Championship by Alpine in the second race at Imola.

The ART Grand Prix driver had been in commanding form all weekend, this win compensating slightly for the false start – influenced by a clutch problem – which cost him victory in race one.

Ferrari junior Dino Beganovic continued his superb start to the season with second place to extend his championship lead, with Kas Haverkort taking the final podium position, his first in FREC, for Van Amersfoort Racing.

Front-row starter Tim Tramnitz slipped down the order to take eighth at the flag, though this was enough to take rookie honours.

After a pre-race rain shower the drivers frantically changed back to slicks on the grid. With a significant difference in grip levels on either side of the grid, the race ran its first two laps behind the safety car.

As the field came past the pits Beganovic pulled alongside, passing around the outside into Tamburello as Tramnitz defended the inside line, with Michael Belov diving inside Tramnitz into Rivazza.

Beganovic began to make some inroads into Mini’s lead, bringing it below 10s on lap 5.

Tramnitz was slipping further down the field, as Haverkort, having disposed of Bortoleto around the outside at Tamburello, repeated the move on Tramnitz for fourth on the next lap.

Before Haverkort could make further progress, a sudden thunderstorm caused havoc around the circuit. Pietro Delle Guanti touched the grass verge on the run down to Tamburello, spinning across Paul Aron. A following Sebastian Montoya, confronted with Delli Guanti sideways in front of him was launched over the car and into the gravel trap.

The inevitable red flag period allowed most of the field to mount wet tyres, although a few chose to take the safety car restart with slicks despite the treacherous conditions, earning themselves an investigation from the stewards in the process.

A strong restart from Mini after four laps behind the safety car put him out of reach of Beganovic.

Tramnitz continued to slide down the top ten as Bortoleto, Hadrien David and Aron found a way past in the spray.

With a maiden FREC podium in his sights, Haverkort was all over Belov who ran wide at Acque Minerali before a slight mistake at Tamburello allowed the VAR man past, with Bortoleto and David immediately following suit.

With the clock ticking down to zero, the safety car was deployed again, meaning the race would finish under yellows.

Though Sami Meguetounif had participated in qualifying in the morning, he was withdrawn from the race itself after his heavy crash in race one.