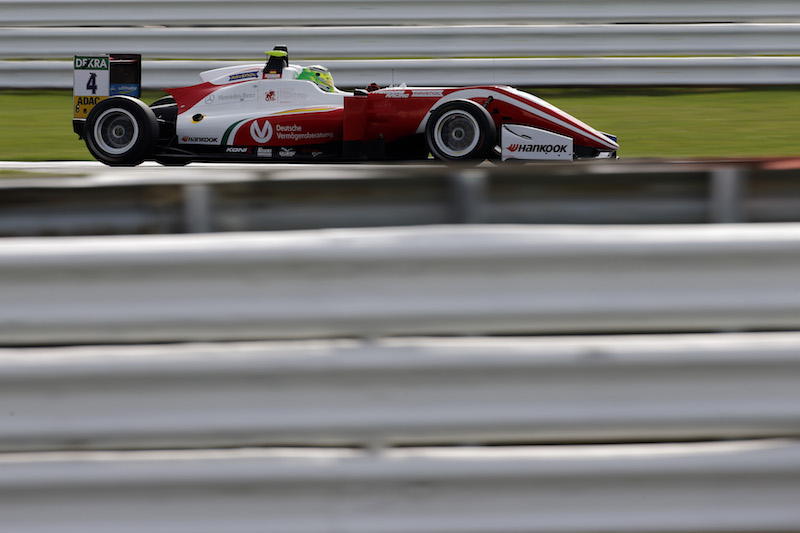 Mick Schumacher kept up his strong recent form in the Formula 3 European Championship as he beat Prema team-mate Marcus Armstrong to pole in first qualifying at Misano.

Misano is hosting a European F3 round for the first time this weekend, and although all of the teams tested at the Italian venue for two days in April, it was the local team Prema that dominated a track it knows well, locking out the top four places.

Schumacher, who won twice at Misano with Prema in Formula 4 at the start of 2016, set his pole lap of 1m27.934s with around two minutes to go, displacing Armstrong from top spot by 0.138s.

Championship challenger Armstrong closed that gap to just 0.019s but ultimately had to settle for second best to Schumacher, who took his first two F3 wins at the most recent rounds at Spa and Silverstone.

Guan Yu Zhou, another graduate of Prema’s F4 operation, did beat Schumacher’s time before the finish but it was immediately deleted for abuse of track limits, leaving him third.

Prema’s top-four lock-out was completed by Robert Shwartzman – another Misano winner in F4, albeit with a rival team.

The fifth and final Prema driver Ralf Aron topped free practice but could manage only ninth in qualifying.

Championship leader Dan Ticktum was the best non-Prema driver in fifth place for Motopark, just 0.086s away from pole.

Jehan Daruvala also offered a strong challenge to Prema for Carlin, finishing up sixth after leading at the mid-way point.

All three Hitech cars were just outside of the top 10, with Enaam Ahmed 11th in front of Alex Palou and Ben Hingeley.

Fourteenth-placed Marino Sato was just 0.36s away from pole.

Beckmann beats Hubert for GP3 pole with Trident at Spa