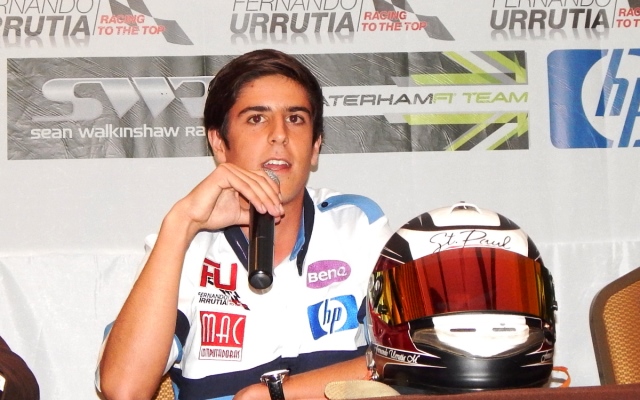 Fernando Urrutia will become the latest Mexican driver to race in BRDC F4 after completing a deal for next month’s Winter Championship with the SWR team.

Urrutia will partner team regular Jordan Albert, who sits tenth in the main championship standings with a round to go having taken his first podium last time out at Donington.

A former karter, Urrutia has single-seater experience in Formula Vee and Formula 2000 and earlier in 2014 finished second in the PanamGP Spring Series. He is mentored by Alfonso Toledano, an ex-F3 racer, promoter of the PanamGP series and father of current racer Picho.

?In European competition the best drivers are produced and that?s why we?re going to the UK,? said Urrutia.

?I hope to become a worthy representative of Mexico. We’ve decided to compete in the series because it?s very competitive, the world?s top karting drivers are going there and this will be an important experience for my career.

?Racing in Europe is one of my goals and it?s a dream come true. There are possibilities to race in 2015 in this championship or others. However, for now, I want to focus on the Formula 4 Winter Series, get good results and later we?ll see what happens.?

This year, Mexicans Diego Menchaca, Rodrigo Fonseca and Alfredo Zabalza have all competed in the series, the first two with backing from Telmex.

Sean Walkinshaw, whose eponymous team announced a tie-up with the Caterham F1 squad earlier this year, said: ?It?s great news to have two drivers now confirmed for the BRDC F4 Winter Series. Fernando is a very exciting young racer and a promising talent from South America. We all know how competitive BRDC F4 is but I?m sure he?s going to make big strides over the course of the championship.?

The Winter Championship takes place over eight races at Snetterton and Brands Hatch in November.