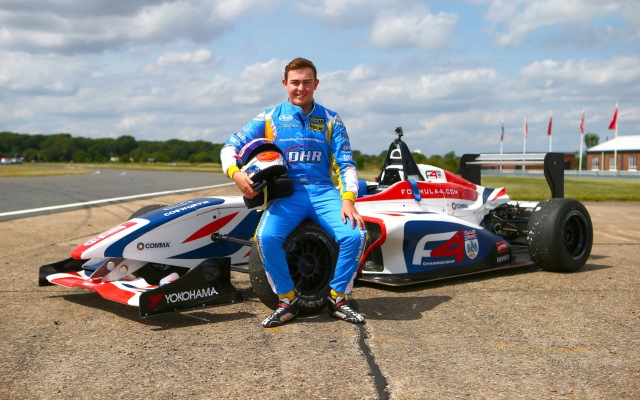 The Meridian team has switched from Formula Ford GB to the BRDC F4 Championship in time for his weekend’s races at Silverstone, bringing drivers Connor Jupp and Jai Nijjar.

Formed in 2008, Meridian began competing in Formula Ford last year with Connor Mills. This year have run Mills and a number of other drivers.

Jupp joined them for Oulton Park and Croft for his first single-seater races, after a karting career that included seventh in the CIK-FIA KF3 European Championship in 2012.

Nijjar meanwhile was due to make his single-seater racing debut at the most recent round at Snetterton, but Meridian withdrew from the weekend after the pre-event test day after finding damage to Nijjar’s engine and a blown head gasket on Jupp’s car. Mills had already been ruled out after sustaining damage to his engine and gearbox at Croft.

?We?ve been taking a close look at the BRDC F4 Championship since its inception, and the opportunity has now presented itself for us to join the series,” said Meridian team principal Paul Abercrombie.

“It?s clear that BRDC F4 is the most competitive single seater championship in the UK and we?re very excited to be taking part from this weekend onwards with Connor Jupp and Jai Nijjar. Both drivers have tested the car and are looking forward to the challenge.?

?I can?t wait to join F4 at Silverstone,? said the 16-year-old. ?The car is fantastic to drive and the paddleshift gearbox certainly adds to the experience. F4 is a very competitive series and I?m looking forward to racing against lots of drivers who I last competed against in karting. I was able to beat them in karting, and I hope to do the same in F4!?

Nijjar, also 16, had his first car test in a BRDC F4 car at Bedford in May and will now make his racing debut in the series at Silverstone as he steps up from Senior Rotax karting.

“The F4 car was the first single seater I drove and the car was so much fun to drive – the power and the grip was amazing,” said Nijjar. “The step up from karting means I will have a lot of work to do in testing on Friday, but I?m very excited to be making my single seater race debut this weekend, and on the Silverstone Grand Prix circuit.”

Series chief Jonathan Palmer said: “I’m delighted to welcome Meridian to BRDC Formula 4. They have clearly considered the future prospects for their team and drivers very carefully and will enjoy the size and closeness of the BRDC F4 grid with the prospect of podium finishes soon.”