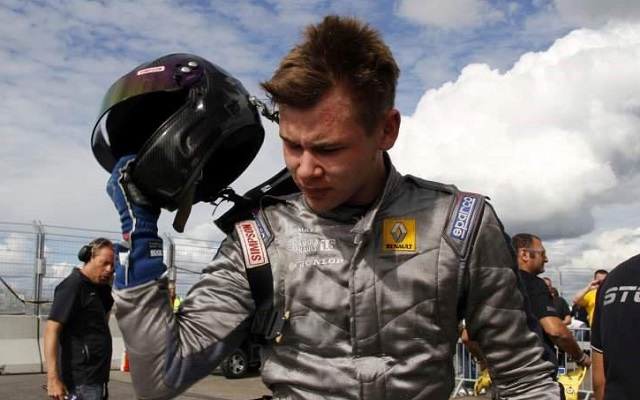 Formula Renault 1.6 Nordic racers Oliver Soderstrom and Robert Svensson secured their respective maiden victories in category in the 2014 championship’s fourth round at Parnu.

Kevin Aabol and championship leader Joonas Lappalainen made up the front row for race one in qualifying, but the first heat would end up affected by strategic gambles and weather conditions.

On a drying track, most drivers opted to start the first race on slicks – a decision which proved non-optimal. Scuderia Nordica’s Soderstrom was among the few to opt for the wet compound and managed to charge his way into the lead over the first two laps, soon followed by fellow strategy gamblers Pontus Fredricsson and Ilmari Korpivaara.

While the track went on to further dry as the race progressed, the trio were too far ahead to be challenged by any cars on slicks. Soderstrom secured the win, while Fredricsson and Korpivaara made up the podium.

Aabol finished fourth as the top driver on dry tyres ahead of Lappalainen, Svensson, Lukas Sundahl and Ralf Aron. Robin Fredriksson, Paul Blomqvist and Karl Ero rounded out the field.

The grid for race two was decided on best laps from race one, with Aron and Sundahl making up row one. It was Blomqvist, however, who charged his way to the front, passing Aron for the lead on lap three.

The duo took the checkered flag first and second, but both were given post-race time penalties for jump starts, alongside championship contender Sundahl.

As such, Svensson inherited his first win in the series, finishing half a second ahead of Lappalainen with Aabol bringing up the podium.

Soderstrom was fourth, with Blomqvist and Aron classified fifth and sixth respectively. Fredriksson, Sundahl and Ero made up the list of finishers.

Lappalainen continues to lead the standings with 165 points. Sundahl remains second with 132 points, ahead of Fredricsson and Aabol at 123 and 113 respectively.