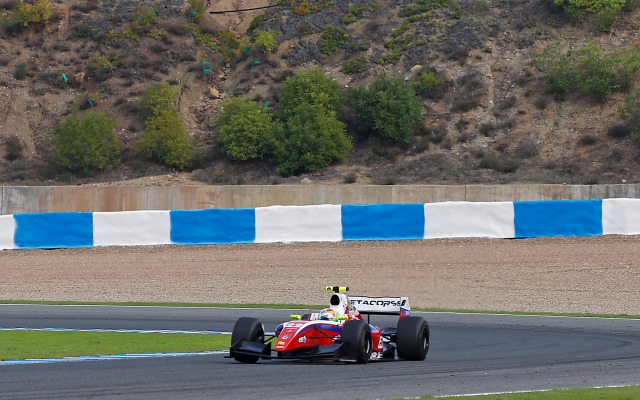 Roberto Merhi recovered from the disappointment of missing out on the Formula Renault 3.5 title by claiming pole position for the final race of the season at Jerez.

Oliver Rowland led much of the session, and three purple sectors on the first flying lap of his final run only extended his advantage over the field.

However, Merhi was able to beat it and another improvement on his final lap secured him pole position.

Rowland was shuffled down the order before returning to second place to set him for another challenge at victory after missing out by less than a tenth in race one.

Close behind Rowland in third was Pierre Gasly, who is only three points behind Merhi in their fight for second in the championship.

Nicholas Latifi‘s decision to compete in the FR3.5 finale instead of the final European F3 round looks to have paid off as he qualified an impressive fourth ahead of Will Buller and Zoel Amberg.

Pietro Fantin and Oscar Tunjo will share row four of the grid ahead of Matthieu Vaxiviere, while Beitske Visser followed up her best race result of fifth in race one with a tenth-place qualifying result.

Several big hitters were left outside of the top ten, with Sergey Sirotkin 11th, race one winner Will Stevens 13th and champion Carlos Sainz only 14th.