Megennis and Malukas to step up to Pro Mazda in 2018 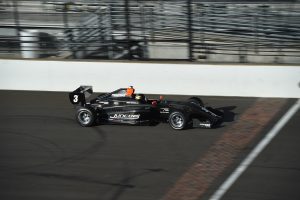 The next three signings for the 2018 Pro Mazda season have been revealed, including USF2000 race winner Robert Megennis joining Rinus VeeKay at Juncos Racing.

Megennis drove for Team Pelfrey in USF2000 this year, and led the championship after winning the first race from pole. He was unable to repeat that form though, and ended the season in sixth, with only three other top five finishes to his name.

The season before he also finished sixth, again with Pelfrey, taking two podiums and three other top five finishes. He was awarded ‘Rookie of the Year’ for his efforts

?We had a great Chris Griffis test, where we led sessions on both days,” he said.

“I have a lot of confidence in Juncos’ ability to not only give me the fastest car on the grid but also to help me become a better all-around driver.

“The team has proven itself in every series it?s contested, and I’m confident that we will perform with the new [Tatuus] PM-18.”

David Malukas is the second USF2000 driver to confirm his presence in Pro Maza next year, and makes a joint step up with the BN Racing team.

Malukas made his MRTI debut in the USF2000 round at Indianapolis, and took a pole and a second place finish next time out at Road America on his way to 10th in the standings.

The 16-year-old has also raced in Formula 4, finishing sixth in the 2016-17 UAE championship, and 18th in the ADAC championship this year with Motopark.

Rather than placing Malukas at a team for a campaign at home, family friend and experienced motorsport engineer Bryan Nuttall started his own, with Pro Mazda champion to-be Victor Franzoni hired as driver coach.

In 2018 the team will expand its USF2000 programme alongside its foray into Pro Mazda, which started impressively at the Memorial test.

?David is very mature for his age, so I believe it?s well within him to be able to handle the Tatuus PM-18,” said Nuttall.

“With so many of the top drivers from USF2000 moving up to Pro Mazda next year, he?ll be racing against some very good competition.

?The Chris Griffis test went extremely well for us, and showed that we can compete with some of the best teams in the whole Mazda Road to Indy paddock. Even though we are such a young team, it shows on an engineering front what we can do.?

The fourth confirmed Pro Mazda entry is the returning Nikita Lastochkin, who finished fifth this season.

The Russian will be driving for Cape Motorsports, who he drove for in USF2000 in 2016.

Lastochkin’s 2017 season was spent with Team Pelfrey, with his best achievement being a pair of podiums at Road America.