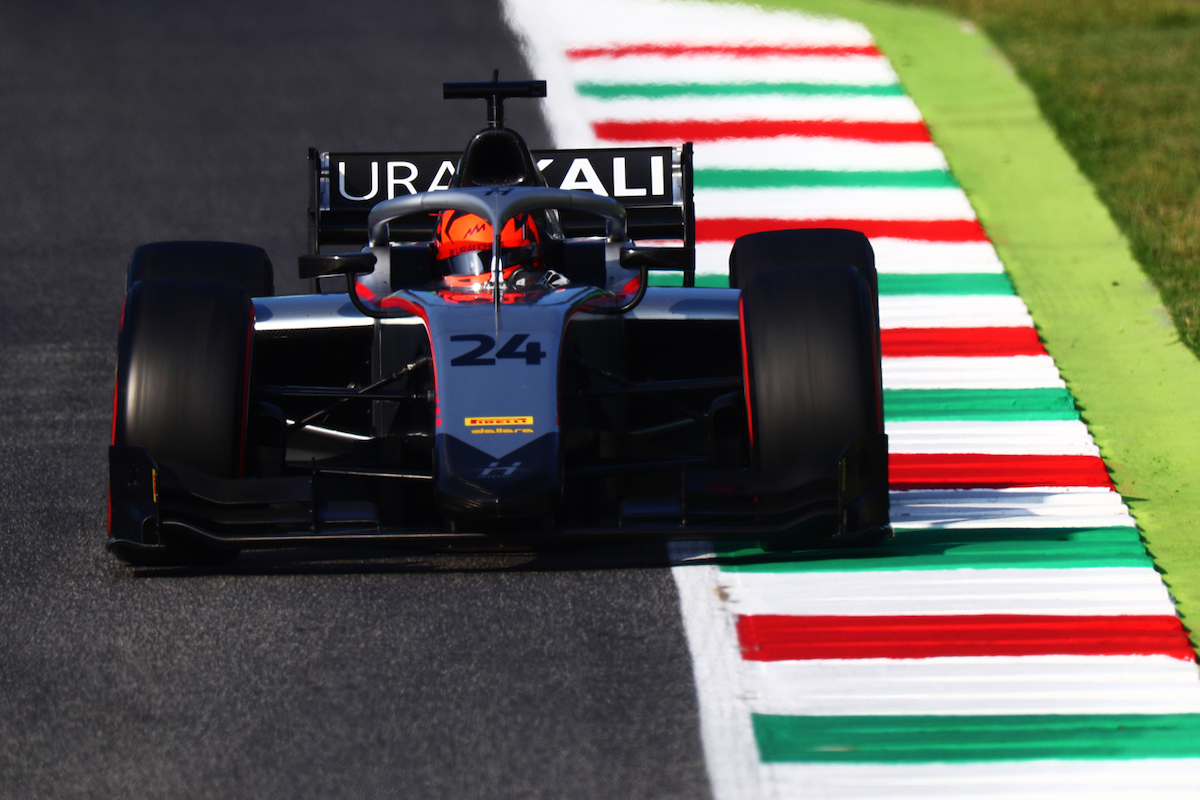 Nikita Mazepin stole his second Formula 2 feature race victory in a Hitech one-two after a safety car led to late drama at Mugello.

Having started on the alternative strategy from 14th on the grid, Mazepin was 10th when the race restarted with seven of the 33 laps remaining.

Light contact between Yuki Tsunoda and Dan Ticktum at Turn 1 over third position was followed by a bigger coming together on the run to Turn 2 between Jack Aitken, Guanyu Zhou and Mick Schumacher.

While the safety car came back out to retrieve the cars of Zhou and Aitken, Mazepin had benefitted from all the chaos to move up into third place on his relatively fresh soft tyres, while polesitter Christian Lundgaard continued to lead the other Hitech driver Luca Ghiotto on the hard tyres.

On the restart with three laps to go, Mazepin leapt straight into the lead on the inside of Lundgaard at Turn 1, as Ghiotto went around the outside. It got surprisingly tight between the two Hitech drivers at Turn 2 but Mazepin did enough to seal the lead and went on to win by 4.4 seconds.

Lundgaard had looked in control and on course for his maiden feature race triumph. He kept the lead from pole at the start and quickly got out of DRS range of the chasing Ticktum, before starting to struggle again on the soft tyres. He pitted as soon as the pit window opened at the end of lap seven.

Ticktum continued for two further laps – a decision he labelled at the time as “a mistake” over the radio to his DAMS team – and was passed by Ghiotto, who’d made a flying start from seventh on the grid.

Both rejoined behind Lundgaard when they did pit, and the ART Grand Prix driver did well to find a way through slower traffic in the middle of the race on Mugello’s twisty layout. When Mazepin pitted from the lead at the end of lap 21, Lundgaard had two seconds in hand over Ghiotto.

Soon afterwards, Giuliano Alesi pulled off the track with a mechanical issue and race control tried to cover this with a virtual safety car. Marshals had difficulty pushing Alesi’s car through a tight gap in the barriers however, leading to the full safety car so that it could be craned over the barriers.

At the restart it was Zhou who was best-placed on the soft tyres rather than Mazepin, having pitted two laps earlier and gained track position. Schumacher, who started 15th, had pitted at the same time and he somehow escaped seemingly unscathed from the collision with Zhou and Aitken, leading him to finish fifth ahead of Lundgaard.

That puts Schumacher into the championship lead after Callum Ilott was forced to pit for a new front wing when he ran into the back of Tsunoda at the first restart when the Carlin driver hit Ticktum. Ilott recovered to 12th in the final laps but failed to score along with Robert Shwartzman, who was ahead of Schumacher before developing a technical issue that eventually forced his retirement.

Ghiotto managed to hold onto second place under attack from Felipe Drugovich, who was one of several drivers to make a second pitstop for fresh tyres under the first safety car. Louis Deletraz, on a more conventional hard-soft strategy, managed to grab third away from Drugovich on the last lap for his first feature race podium of the season.

Behind Lundgaard, Juri Vips scored his first F2 points in seventh and Artem Markelov took eighth and reversed-grid pole for the sprint race. Marcus Armstrong was ahead of Drugovich after also making a second stop but ended up ninth in front of Jehan Daruvala.

Tsunoda was eighth on the road but took a five-second penalty for the contact with Ticktum leaving him him 16th, one place ahead of Ticktum.