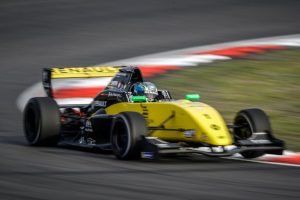 Fewtrell spent the first half of the Group A session swapping fastest times with title rival and fellow Renault junior Christian Lundgaard. Twice the Brit jumped to the top of the times only for Lundgaard to displace him seconds later. His break came when a mistake in the second sector meant Lundgaard couldn?t answer Fewtrell?s new benchmark, a 1m56.332s.

Both drivers improved in the closing stages of the session, but Lundgaard couldn?t find enough pace to displace Fewtrell again. R-ace GP driver Fewtrell ended the session with a 1m56.028s lap, almost three tenths of a second quicker than MP Motorsport’s Lundgaard.

Fewtrell’s team-mate Charles Milesi knocked Lundgaard down to third in the group with his final lap of the session, meaning the championship leader will start the second race from fifth.

Race one winner Logan Sargeant was top of the order when the chequered flag fell at the end of the Group B session, but a late improvement for R-ace GP team-mate Victor Martins relegated him to the second row of the grid. Martin?s best time of the session was almost a second slower than Fewtrell?s.