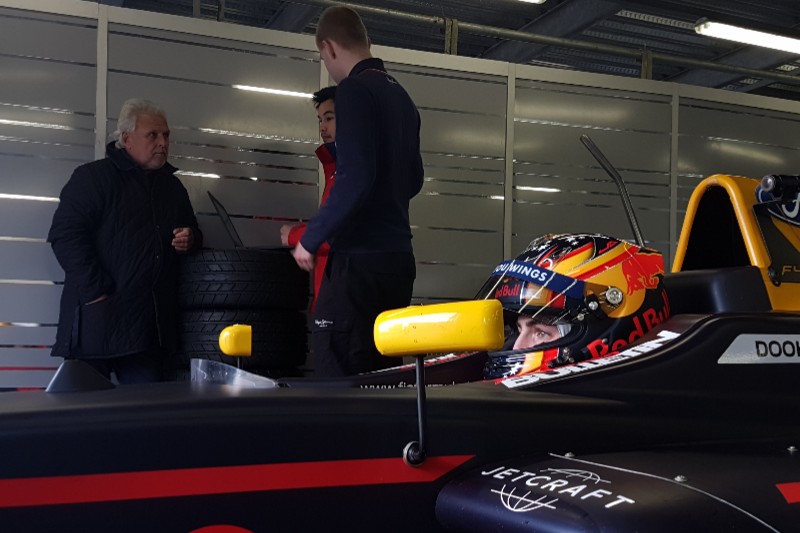 Jewiss’s title rival Ayrton Simmons started the race from pole, and immediately engaged in battle with Arden’s Dennis Hauger. The latter briefly took the lead, before both were overtaken by Hauger’s Arden team-mates Patrik Pasma and Doohan.

Pasma and Doohan ran side by side until Brooklands, where Doohan took the lead. The Australian couldn’t stretch out a lead though, as a multi-car incident at Copse left the race under safety car conditons for several laps.

JHR Developments’ Josh Skelton has rearended Double R Racing’s Sebastian Alvarez going into the first corner of the second, with Lucca Allen also going off. Alvarez and Allen had to be recovered from the gravel.

Doohan got a jump on his rivals heading into Brooklands on the restart, giving him a comfortable margin that he extended through the rest of the race. The victory was his third of the season.

Pasma looked comfortable in second as a result of Simmons and Hauger continuing their battle for position behind him for third. In the closing stages of the race this brought race one winner Johnathan Hoggard and Jewiss into play, with Jewiss taking fifth from Hoggard around the outside of Copse on the final lap.

He quickly closed up on Hauger, who had had his attacks rebuffed by Simmons at Copse, Maggotts and Brooklands. Simmons’ defence through Brooklands allowed Jewiss to draw alongside Hauger through Luffield, and then inside Simmons through Woodcote. The three drivers crossed the line in a photo finish, with Jewiss leading Simmons and Hauger.

Jamie Sharp was denied eighth and then ninth place late in the race by Seb Priaulx and Josh Skelton. After making it to the pits for repairs and just staying on the lead lap, Skelton spent the second half of the race chasing down the top 10.

Having been denied his championship debut in race one due to crash damage, Rosso Verde Racing/Scorpio Motorsport driver Christian Lester marked his first race appearance with 11th place and a new rear end.

Paavo Tonteri failed to finish the race after multiple trips to the pits and a puncture.