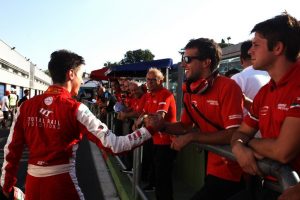 Olli Caldwell made it two wins from two races at Vallelunga, as the Italian Formula 4 title fight got even tighter.

Caldwell enjoyed a quiet race from pole, putting in fastest laps early in the 30-minute encounter to pull away from Petr Ptacek in second. Ptacek hit back with a handful of quick laps of his own but was unable to close the gap to Caldwell and attack turned to defence in the closing stages of the race, when he found himself with Caldwell’s Prema team-mate Fittipaldi on his tail.

Fittipaldi, having shaken off title rival Leonardo Lorandi earlier in the race, managed to find a way past Ptacek in the final four minutes of the race. He set about closing the gap to his team-mate but ran out of time before he could catch him, eventually finishing almost three seconds behind.

Fellow Prema driver Guanluca Petecof was also looking to make up a last minute position. The Brazilian racer caught onto the back of Lorandi in the closing stages of the race and made a number of attempts to force a mistake from the points leader. Bhaitech driver Lorandi didn?t put a foot wrong, however, and took the chequered flag fourth, behind Ptacek.

The result means Lorandi heads into the final four races of the season with just a six point advantage over Fittipaldi while Caldwell closes in on the championship fight a further 42 points back.

After an early battle with Umberto Laganella, Gregoire Saucy finished a comfortable sixth ahead of William Alatalo.

After falling away from Saucy in the second half of the race, Laganella found himself leading a three-way fight at the bottom of the top 10, with Frederico Malvestiti and Anthony Famularo on his tail.

Malvestiti was trying to find a way back past Famularo when the Jenzer Motorsport driver locked up, diving up the inside of Famularo. Unable to stop in time, he hit the side of Laganella, pushing them both wide and allowing Famularo to come through to take eighth.

Despite Malvestiti continuing to push, Famularo held the position to come home eighth, his best finish of the season. Giorgio Carrara passed Laganella late in the race to take the final points paying position.