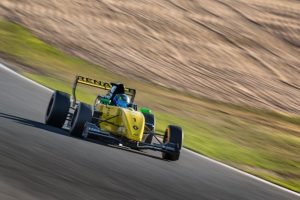 R-ace GP’s Max Fewtrell moved up to second in the Formula Renault Eurocup standings after winning the second race of the weekend at the Nurburgring.

Fewtrell, who claimed pole position earlier in the morning, was not troubled when the lights went out to start the first lap.

The race was neutralised one lap later after AV Formula Axel Matus was spun into the pit wall running further back in the pack, with the red flag eventually coming out after marshals ran into trouble trying to get the heavily damaged car off the track.

When the race eventually restarted Fewtrell calmly kept hold of the lead, extending the gap between himself and team-mate Victor Martins to 2.249 seconds by the end of lap 15 when the chequered flag came out.

The 25 points moves him past Yifei Ye in the standings, who finished sixth behind championship leader Christian Lundgaard.

Charles Milesi gave R-ace GP a podium lockout after finishing the race in third, with Logan Sargeant then making it a historic 1-2-3-4 for the team.

The top seven was completed by Arden’s Oscar Piastri, marking no changes in the end result from the starting positions.

Tech 1 Racing’s Alexander Smolyar made up ground after starting the race in 10th to move into eighth by the time the safety car came out and the race was stopped, which is where he finished. Alex Peroni and Thomas Neubauer rounded out the points.