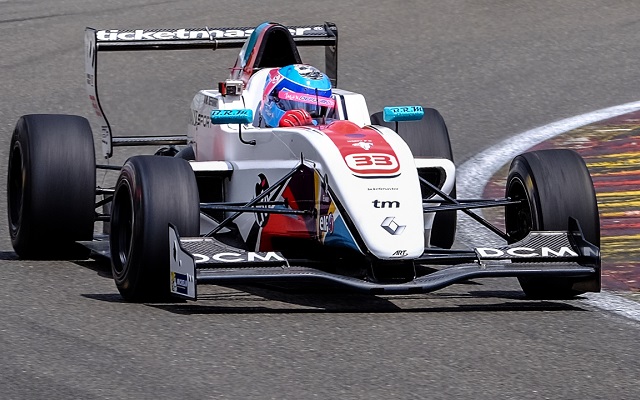 Max Defourny converted pole position into a commanding maiden Formula Renault 2.0 victory in the first of the weekend’s NEC races at Spa-Francorchamps.

On his home circuit, the Belgian got a good getaway to immediately pull a gap over the field as Kevin Jorg took second away from the slower-starting Callan O’Keeffe.

Defourny’s advantage stood at around 1.5 seconds for much of the race, but was able to extend that to over four seconds in the closing laps as Jorg dropped back.

O’Keeffe had reclaimed second place at Les Combes on the opening lap, only to lose out again to Jorg a lap later.

Late on, Jorg fell back towards the battle between O’Keeffe and Deletraz and had to defend from the South African on the last lap, but the positions remained the same.

Sasahara was a distant fifth, not far ahead of Force India protege Jehan Daruvala and Dries Vanthoor, whose elder brother Laurens goes in search of back-to-back Spa 24 Hours wins at the circuit this weekend.

Nikita Mazepin made a pass on Darius Oskoui for eighth, while Stefan Riener took 10th as the leading Koiranen entrant on the squad’s NEC return.

New team-mate Dan Ticktum had held that position after a strong start to his first FR2.0 race but dropped back as the race wore on and finished 15th.

Charlie Eastwood had a strong race to 11th from the back of the 25-car grid after a change of chassis, coming out on top of a scrap with British racers Colin Noble, Alex Gill and Ticktum.

Ninth-placed starter Ferdinand Habsburg was the race’s only retirement after slowing and pitting on the opening lap.