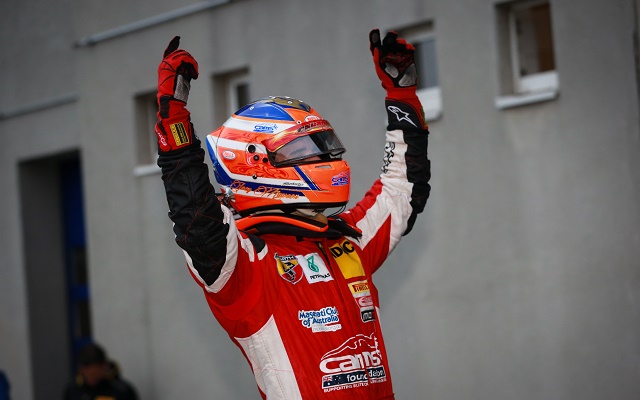 Mawson led from beginning to end and at one point looked set to pass Joel Eriksson for runner-up in the standings, but the Swede stayed out of trouble and secured the spot with a podium finish.

Starting from pole, Mawson headed Marek Bockmann and Michael Waldherr on the opening lap, with plenty of battles going on further in the pack.

Series champion Marvin Dienst found himself involved in one of those battles and, as a result, ran wide into turn one on the opening lap, spinning around.

Job van Uitert and Nikolaj Rogivue then did the exact same thing behind him, with van Uitert sliding at speed into the stationary Dienst.

But Dienst was unhurt while van Uitert’s car was split in half and he was extricated with a neck brace? on him as a precautionary measure.

After a lengthy red flag cleanup, the race restarted with 15 minutes left on the clock but the green flag period didn’t last even a full racing lap.

Bockmann, having dropped behind Waldherr, was then forced wide into the hairpin and subsequently ended up involved in a three-wide dive into the Mercedes corner, which saw Mike David Ortmann collect Toni Wolf.

But Bockmann continued and then ran wide in Mobil 1 Kurve and, as he rejoined, Giorgio Maggi was caught off guard and slid off in the barriers.

The final safety car was brought out when Tim Zimmermann attempted a surprise move on Waldherr into Mobil 1, the duo both heading straight, with Zimmermann finding himself in the barriers.

As such, David Beckmann inherited second behind Mawson, with Eriksson picking up third place, having been outside the top ten on the opening lap.

Janneau Esmeijer took fifth, ahead of Kim-Luis Schramm and VAR trio of Harri Newey, Mick Schumacher and Kami Laliberte, with Bockmann and Moritz Muller-Crepon rounding out the top ten for Jenzer.