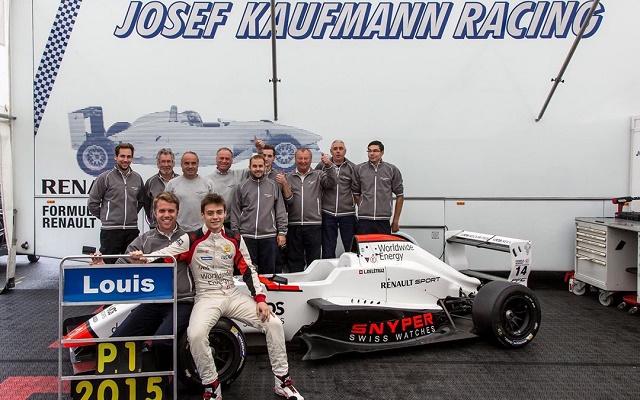 Deletraz became the first driver to secure a hat-trick in a NEC triple-header since Daniil Kvyat in the 2011 finale at Monza.

The Swiss driver led every lap of the third race ahead of JKR teammate Kevin Jorg as the duo locked out the top two for the fifth time this season.

Deletraz converted his pole position into a turn-one lead with a decent launch as Jorg and Ukyo Sasahara both overtook the slow-starting Jehan Daruvala.

The Indian’s struggles continued when he collided with Dries Vanthoor at Sachs and then subsequently picked up a drive-through for jumping the start.

The safety car entered the track at the end of lap one following a spin from Alex Gill?while entering the final corner, which saw him collect Josef Zaruba with the duo retiring.

Deletraz and Jorg both comfortably pulled away from the rest of the field after the restart and the duo cruised to the checkered flag, separated by a second for most of the race before a slow lap from Jorg doubled the gap.

The podium was completed by Sasahara, who was closely followed by Henrique Chaves after the?safety car stint.

However, the Portuguese lost out to Max Defourny later on to take fifth, which was still his best result of the season.

Vanthoor was set to finish?sixth but the Belgian lost speed during the final lap and dropped behind Stefan Riener and Denis Bulatov.

Darius Oskoui grabbed ninth with Bartlomiej Mirecki making it to the top ten for the first time this year.