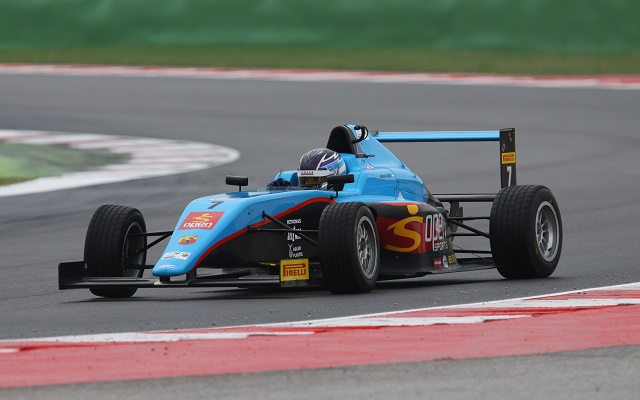 Jenzer’s Marcos Siebert made the most of a drying Misano track in the final race of the second Italian F4 season, taking the win as leader Robert Shwartzman was penalised.

Shwartzman commenced the race from pole and withstood pressure from a quick-starting Diego Bertonelli over the opening lap.

He then pulled away from the field, with Bertonelli coming under pressure from Ralf Aron, who he had passed at the start.

Aron briefly retook second on lap two, but Bertonelli was back past on lap five.

And that was the beginning of a rapid decline for Prema, with both Aron and Guan Yu Zhou massively struggling for pace and eventually falling out of contention.

Shwartzman and Bertonelli looked set to finish the race in first and second, the Russian in with a real chance to take the runner-up spot in the standings from Zhou, but both picked up late drive-throughs for track limit infringements – as did several other racers.

As such, Siebert was free to cruise to the finish, while Vincenzo Sospiri Racing’s Marino Sato powered past both Ye Yifei and Nico Rindlisbacher on slicks on the final lap to finish runner-up on the road.

However, Sato, Yifei and Rindlisbacher would all be given 25-second penalties post-race, which allowed newcomer Simone Cunati to claim second place.

Bertonelli recovered to be classified in third, ahead of Shwartzman, Sato and first-time points-scorer Riccardo Ponzio.