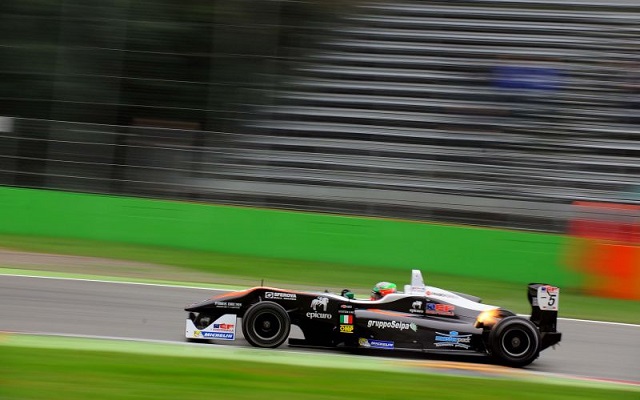 Damiano Fioravanti claimed his maiden race victory of his career on home soil in the second Euroformula Open race at Monza.

Lining up second?on the grid, he overtook polesitter Konstantin Tereshchenko on lap two and managed?withstand pressure from Vitor Baptista in the closing stages.

After losing the lead, Tereshchenko was passed by Igor Walilko next time around as well with?the Pole covering the inside line at the entry of the first chicane.

Tereshchenko, switching?to the outside to cover Diego Menchaca,?misjudged the gap between the cars and made contact, damaging his front suspension.

That allowed the RP duo of Fioravanti and Walilko to take the first twospots and they were soon joined by Baptista, who charged his way through the field in just four laps despite running only eighth after the start.

The Brazilian did not settle for third though as he eased past Walilko and slowly started to close the gap to Fioravanti.

Although?the gap shrunk to 0.5s, he was unable to make a?move?and had to settle for making it home in?second with Walilko completing an all-RP podium.

Tanart Sathienthirakul ended up best of the rest by taking fourth with Yu Kanamaru claiming fifth following a battle with Leonardo Pulcini.

The Italian eventually dropped behind Diego Menchaca to take seventh, as the top ten was completed by Yarin Stern, Kantadhee Kusiri and Henrique Baptista.

Before the season finale at Barcelona, Baptista extended his championship lead to 32 points with 54 left up for grabs.