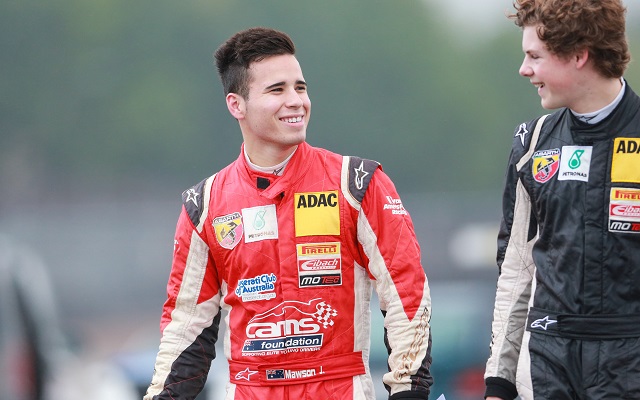 He was followed by Marvin Dienst, who completed a near-perfect weekend, adding a second place to his? two Saturday victories.

Schramm was the driver who spent most of the race in the lead, thanks to pole-sitter Michael Waldherr stalling on the grid.

The first of three safety car periods started right after the start as a spin from Marilyn Niederhauser ended not only her race, but Marek Bockmann‘s and Jan Jonck‘s races as well.

The first one was caused by Nico Rindlisbacher‘s beached car and the other incident, triggered by Jonathan Cecotto making contact with Moritz Muller-Crepon?and sliding into Waldherr, left the drivers four minutes of green flag racing before the chequered flag.

An aggressive final stint from Mawson lead on the penultimate lap, followed by Dienst and Schramm, who celebrated?his first podium?in the series.

Ortmann enjoyed a repeat of his top finish in fourth, followed by Beckmann and Eriksson.

Jason Kremer secured seventh ahead of Tim Zimmermann, who recovered from having to pit on lap two.

The top ten was completed by the race’s biggest movers as Janneau Esmeijer and Robert Shwartzman, who fought their way up?from 24th and 27th on the grid respectively.

With two more rounds to go, Dienst is leading the championship by 34 and 37 points over Eriksson and Mawson.